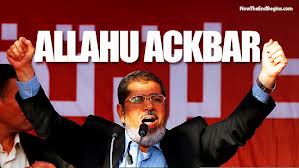 Some new evidence surfaced on Wednesday that sheds further light on Mohamed Morsi as the likely mastermind of the Benghazi attack that left four Americans dead. I will get to that evidence in a moment but I quickly want to summarize the evidence that we have previously reported.

On June 3rd I reported that an Egyptian Journalist has linked Morsi to Benghazi through the translation of a YouTube video that was taken at the scene. Her assessment was that the terrorists were speaking in an Egyptian dialect of Arabic and she quoted one of the terrorists as saying, “Don’t shoot. Don’t shoot. Dr. Morsi sent us.” This gave us reasonable suspicion to think that the orders could have come from Morsi.

On June 9th Steven Ahle shed light on the possibility that Morsi’s orders may have been for the kidnapping of Ambassador Stevens. He cited the fact that Abdallah Dhu-al-Bajadin, an Al Qaeda weapons expert, claims that it was a case of a foiled kidnapping and that Ambassador Stevens’ cause of death was lethal injection. Was Ambassador Stevens supposed to be the collateral used in the exchange for “The Blind Sheik?” That story has been reported for months and months (the prisoner exchange) but the new evidence we are seeing would seem to support it fully. Morsi has been the missing link to hold that story together.

Also on June 9th I reported that John Kerry authorized 1.3 billion dollars in aid to Egypt and waived a number of democratic conditions that are supposed to be met in order to release that aid.

On June 13th Pamela Geller reported that Magdi Ahmad Hussein had a “hot mic” moment in a meeting with Morsi and many of his top advisors. He stated that America and Israel are the enemies of Egypt. He did not realize, until after his comments, that the meeting was being aired LIVE on state television.

On June 23rd Pamela Geller reported that the US is sending troops to Egypt to assist in putting down the “Anti-Muslim Brotherhood Riots.” Of particular note is that these troops are being sent for “the possibility of protecting the country’s border with Israel.” I found that statement more than a bit peculiar.

That brings us to June 26th (yesterday) when Libyan Intelligence documents were leaked to a Kuwaiti news source and started making the rounds throughout the Arab World. Unless you follow certain sites in the states it is highly unlikely that you have heard about this. This is courtesy of Raymond Ibrahim who makes it his business to translate Arabic:

According to a Libyan intelligence document, the Muslim Brotherhood, including Egyptian President Morsi, were involved in the September 11, 2012 terrorist attack on the U.S. consulate in Benghazi, where several Americans, including U.S. ambassador to Libya, Chris Stevens, were killed.

Wednesday, June 26, several Arabic websites, including Veto Gate, quoted the intelligence report, which apparently was first leaked to the Kuwaiti paper, Al Ra’i.  Prepared by Mahmoud Ibrahim Sharif, Director of National Security for Libya, the report is addressed to the nation’s Minister of Interior.

I think it is time for America to announce that Mohamed Morsi is a suspect and the potential mastermind behind Benghazi. I am not sure how much more evidence we need to at least name him as a suspect.

However, I think this story may go much deeper than that. If Morsi was involved as the orchestrator or financier you had better believe that our government already knows that this is the case. If those Libyan Intelligence documents are valid I would suspect that this information was already shared with our State Department.

So why did John Kerry release that funding while “waiving” the conditions? Doesn’t it seem a bit odd to release 1.3 Billion Dollars to a country that is not meeting the requirement for that aid? Could Morsi have leverage?

My opinion is that Morsi is a legitimate suspect and that our federal government knows it. Obama knows it. Kerry knows it. They may already have proof. That is my opinion.

So the real question is this… Why are they trying to cover for him? Is it possible that Morsi’s orders came from us? God help us all if they did.

If you can not see Mohamed Morsi as a possible suspect at this point then you are hopeless. This is coming from a variety of sources and unless it is an orchestrated set up I would assume that much of it is true.

I would think our government would be all over it. If they could implicate Morsi for this then it would take a certain amount of pressure off of Clinton, Obama and now Kerry. Don’t tell me that they would not willingly throw any man, guilty or innocent, under the bus to save their own hides. Yet they aren’t even acknowledging the possibility. Why?

I have arrived at the general conclusion that Morsi is a strong suspect as the orchestrator/financier of the Benghazi attack. I must also suspect our government of being complicit since they have given us no reason to believe otherwise.

If this is the case then the most likely scenario is that Obama authorized the kidnapping so that he would have an excuse to release Omar Abdel Rahman, “The Blind Sheik,” from a life sentence that he currently serves. For those who are unaware The B.S. was born in Egypt.

We all know they are covering something. Could it be that Morsi ordered this attack and our government had complete prior knowledge that he would do so?

Let’s not forget that Stevens was ordered to go to Benghazi by Clinton. Is this why? Was he set up by his own government?

Nothing would surprise me at this point.

The problem is that we the American people don’t know if we can trust anyone representing us. A lot of the questions that should be asked are not being asked.

Here’s a good example. Why is it that none of our congressional leaders seem to be questioning the probability that we hired Al Qaeda to defend the diplomatic mission in Benghazi? How many Americans even know this story? If this ends up being fact that one piece of evidence is enough to try both Clinton and Obama for treason. Are you also aware that the February 17th Martyrs Brigade officially disbanded just hours after the attack? A few days before the attack they announced that they would no longer be providing security. How convenient.

Internet rumors are circulating that General Ham revealed nothing of  real value in his testimony on Wednesday. If that ends up being true then it would not surprise any of us.

The real question is if we can trust any of the people who are supposed to be asking the questions on our behalf. Do they know not to ask certain questions and to avoid certain subjects? Are the hearings a sham to placate us while the real intent is to find no evidence of wrong doing whatsoever? I am starting to think it’s possible.

So for now our hopes are riding somewhat on media sources from the Arab world. I wouldn’t say that is the best position we could possibly be in but it is all we have at this point.

Morsi is more than a suspect. He is a strong suspect. Watch how the government reacts and that will tell you how badly they want to protect him. These stories are starting to leak out and eventually they will have to answer for what is being reported about Morsi.

Is he “The Butcher of Benghazi?”

My opinion is that the pieces have fallen together and Benghazi has been blown wide open. You probably won’t get that story on CNN  but take all of the facts we have and look how they fit together.

Obama agreed to send the Blind Sheik home but he needed Stevens to make it look like a valid prisoner exchange. He made a deal to set it up. It blew up in his face and now we see our congressional leaders chasing their tails like puppy dogs while conveniently avoiding the important questions. The truth lies in Morsi’s involvement and our government’s obvious efforts to protect him. I would be shocked if this is not the real story. Though we may never actually know.