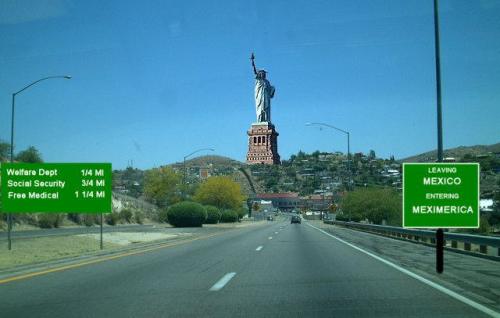 My writer friend, Robert K. Wilcox, speaks the undeniable truth about the Gang of 8  Amnesty for Illegal Aliens bill. FOTM is grateful for his permission to re-publish his essay in its entirety.

The Traitors Among Us

There are traitors in our midst and I’m not talking about NSA whistleblower Edward Snowden. I’m talking about every corrupt, greedy, self-serving, cowardly politician hurting Americans. There are many and they don’t give a damn. Amnesty is the latest crime these sell-outs are perpetrating on the people. It’s a mugging just as sure as a criminal puts a gun to your head and takes your money. They did it with Obamacare and they’re going to do it with amnesty.

There’s no reason for amnesty. Enforce the borders, then deal with those who have broken the law. Democrat traitors want amnesty to increase their power. To hell with existing law which demands border enforcement. Who cares about the rule of law and the jobs of American workers? Amnesty, they know, will give them many more voters. Those pardoned will overwhelmingly vote Democrat. The traitor press and socialist dominate education system has guaranteed that.

Republican traitors want amnesty for the cheap labor it will provide Big Businesses who are their donors and keep them elected. There are also the Republican fools who incredibly believe it will actually gain their party votes. The Democrats know better but why burst the fool’s bubble?

The worst traitors are the political leaders who know full well what this [is] about – Obama at the head, Reid and McConnell in the Senate, Boehner and his officers in the House. Obama won’t enforce existing law so the lie of the broken “system” reigns. The system isn’t broken. It might need some tweaks. But it’s the politicians who made the system. They’re the ones who are “broken.” We already have laws that would secure the borders. These broken politicians won’t enforce them.

At least Reid makes no pretense. He’s as slippery as an eel and is using every trick in the senate rules book to move a basically unreadable, near-thousand page bill as fast as he can in order to make it law before anyone has the time to read it. He knows it leaves enforcement up to border dictator Janet Napolitano who will do exactly what Obama wants – not enforce border security. He knows the bill will keep he and Democrats like him in office for decades with millions of newly made Democrats. He knows it will cost low-wage working Americans their jobs and middle-class Americans what little prosperity they have left after all the earlier treason.Their wealth will go to the welfare monster that the newly-amnestied illegal aliens will demand and the newly more powerful Democrats will willingly provide. He doesn’t care a wit. It’s in his interest and that’s all that counts.

McConnell is just as slippery but in a less obvious way. The polls show his party constituents overwhelmingly against amnesty. He wrings his hands and laments the amnesty moves with deep concern on his owl-like face. But despite the fact he could block it with the many tools at his beckon as minority leader, he does nothing. Leadership means leading. But the Obama style of leadership – being absent – is catching. McConnell is a prime example. It subverts the Americans he supposedly represents.

Boehner never was a leader. He got his job like so many other Republican leaders “because it’s his time.” I don’t know how he keeps it. I got his newsletter today. The headline reads “Our students deserve better.” It’s about how he wants to hold the line on student loan interest rates. Student loans! At a time when the very future of his party and the nation’s borders hinges on the amnesty bill, he’s concerned about student loans going up? What about Obamacare, Benghazi, IRS politicization, Fast and Furious, the attorney general lying to congress? No, those important issues take a back seat. He wants to control student loan interest rates.

That isn’t even Republican. Republicans are supposed to favor free markets; i.e, let the interest rates be what the market determines. But that’s typical of the confused pap, cowardly reticence to challenge, and disregard for the nation’s pressing issues coming from the speaker’s office. He was elected speaker to attend to America’s major problems with the power of the House. But he’s unaware of them, afraid, or too self-serving to care. A pundit I heard called him “a used car salesmen, just wanting to make a deal.” What could be more pressing than making sure the borders are closed when terrorists are daily crossing them, threatening our lives? Student loans? Would you like to see the sedan?

They’re selling us down the river, Democrats and RINO Republicans, forcing this amnesty without care for its effects on our nation or even reasonable debate about its ills. It’s tantamount to treason, for it will lead to a catastrophic invasion of America that violates its sovereignty, tramples the rule of law and fairness, and will ruin the country economically as surely as if a spy divulged secrets allowing the nation to be invaded.

On Monday, June 24, 2013, the U.S. Senate passed an amnesty amendment to the Immigration Reform bill, which essentially is now the bill.

Furthermore, the amendment is jam-packed with pork. Millions upon millions go to Nevada for tourism marketing, for example — which is why Nevada’s newly elected senator Dean Heller voted “yes”). Others who voted yes get also get huge inflows of cash for programs aimed at putting illegal immigrants to work.

The bill is a disaster as it stands today. Just like Obamacare, the amended amnesty bill is 1,200 pages and we’re only just now starting to get a glimpse of how bad it is. There is no way possible the Senators who voted yes on the amendment were able to carefully read and consider its implications. Yet, they recklessly voted for it anyway.

Here are the “Filthy 15″ Republican senators who have joined the Left in voting “yes” on Amnesty: