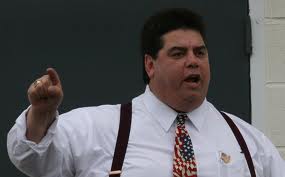 Maryland Delegate Mike Smigiel has had it with the tyrannical gun laws and lack of follow through on the part of the Maryland State Police to complete mandatory background checks within the 7 days required by law in order for a person to purchase a firearm. Smigiel will be calling on Federal Firearms Licensed (FFL) gun dealers to begin releasing firearms on July 3, 2013 to Citizens of Maryland, who have purchased them and not had their background check completed by Maryland State Police within the 7 days. “Enough is enough!” wrote Smigiel.

The call is not only being issued by Delegate Smigiel, but he will also be joined by Senator Edward J. Pipkin and other pro-Second Amendment legislators. They will be going around the state on July 3, 2013 and visiting as many gun stores as possible to speak to owners and law abiding citizens who have patiently waited on the State Police of Maryland to begin complying with Maryland State Law.

Smigiel began contacting stores on June 1 and asked them to share his call with anyone and everyone they were able to in order to elicit as many to join them as possible. After all, there is strength in numbers!

“The State Police have been successful in being able to ignore and thwart their obligations under the law by intimidating gun dealers with the letter they sent out asking for “voluntary” refusal to give the public their purchased firearms after 7 days if the State Police had failed to meet their Statutory obligation to complete the criminal back-round check of the firearm purchaser within the legally stated 7 day time period,” says Smigiel.

“Clearly the insinuation that attaches to the request for voluntary compliance is that a failure to voluntarily comply will invite stricter scrutiny of your heavily regulated legitimate business activities,” he added. “No one can blame the firearms sales industry in Maryland for giving that voluntary compliance under the subtle threat of retribution from the State Police and or other government agencies.”

Delegate Smigiel also pointed out what dealers have faced under the new laws. “The dealers have the additional burden of fearing that exercising their legal right to provide a firearm to a person whom has not had their criminal back-round check completed within the legal 7 day maximum, could result in the possibility that a prohibited person obtain a firearm and then perform some nefarious act with the firearm released because the State Police failed to do their job within the legally mandated time frame. The dealers reluctantly complied expecting that the wait time might go from 7 days to 10 or maybe even 14 days, but no one ever thought the wait time would go to 60 or 70 days or more to do a simple criminal back-round check.”

Whose fault is this backlog? Smigiel lays it in full at the feet of Maryland Governor Martin O’Malley. “It was the Administration which decided to pursue the strictest gun control legislation in the nation,” says Smigiel.  “The results have been to triple the number, of so called, assault weapons in the State of Maryland and to vastly increase the number of handgun purchases also.”

“The State Police are failing to meet their statutory legal obligations and are using the threat of their police powers to intimidate law abiding business owners from complying with State law meant to ensure that law abiding citizens can exercise a Constitutional right,” says Smigiel. “There is no excuse for allowing this behavior, it must stop.”

However, Maryland Shall Issue (MSI) has stepped up and filed lawsuit in order to restore the rights of the people of Maryland.

Smigiel believes that if firearms dealers will heed his call, it will force Maryland State Police to get busy following the law and settle the lawsuit with MSI.

“I truly believe that once the State Police become aware (and I have notified them) that the firearms dealers will all stand together on July 3, unless the State Police issue a letter to countermand the previously sent intimidation letter, they will do so, because they don’t want to have to stand in court and answer to the State law and Constitutional questions raised by MSI in their suit.”

From every conversation I’ve had with Delegate Mike Smigiel, he seems to be an honorable man that simply wants government to only do what it is supposed to do and nothing more. He seems to me to be a defender of the people and we should support that.

Perhaps it’s time for burn barrels and just rid ourselves of the entire government oversight of who has guns.

If you are in Maryland and have any questions, please call Delegate Smigiel on his cell phone at 410-920-0128.