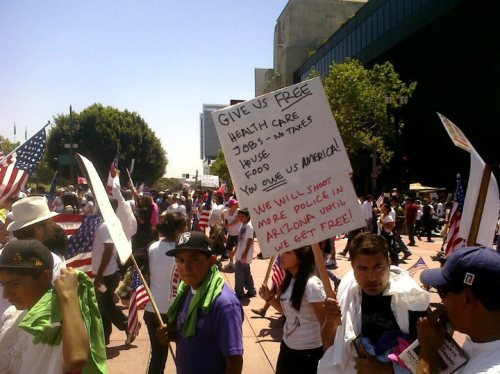 The amendment effectively is now the substitute bill. (See “Amnesty – and the Traitors among us.”

The amnesty bill prompted Donald Ruppert, an Iowa resident to send the following letter to his senator. (To verify the letter’s authenticity, I did a people search and can confirm that there is a Donald C. Ruppert, age 86, who lives in Burlington, Iowa.)

As a native Iowan and excellent customer of the Internal Revenue Service, I am writing to ask for your assistance. I have contacted the Department of Homeland Security in an effort to determine the process for becoming an illegal alien and they referred me to you.

My primary reason for wishing to change my status from U.S. Citizen to illegal alien stems from the bill which was recently passed by the Senate and for which you voted. If my understanding of this bill is accurate, as an illegal alien who has been in the United States for five years, all I need to do to become a citizen is to pay a $2,000 fine and income taxes for only three of the last five years. I know a good deal when I see one and I am anxious to get the process started before everyone figures it out.

Simply put, those of us who have been here legally have had to pay taxes every year so I’m excited about the prospect of avoiding two years of taxes in return for paying a $2,000 fine. Is there any way that I can apply to be illegal retroactively? This would yield an excellent result for me and my family because we paid heavy taxes in 2004 and 2005.

Additionally, as an illegal alien I could begin using the local emergency room as my primary health care provider. Once I have stopped paying premiums for medical insurance, my accountant figures I could save almost $10,000 a year.

Another benefit in gaining illegal status would be that my daughter would receive preferential treatment relative to her law school applications, as well as ‘in-state’ tuition rates for many colleges throughout the United States for my son.

Lastly, I understand that illegal status would relieve me of the burden of renewing my driver’s license and making those burdensome car insurance premiums. This is very important to me, given that I still have college age children driving my car.

If you would provide me with an outline of the process to become illegal (retroactively if possible) and copies of the necessary forms, I would be most appreciative.

Thank you for your assistance.

Your Loyal Constituent, (hoping to reach ‘illegal alien’ status rather than just a bonafide citizen of the USA ),

Please pass this on to your friends so they can save on this great offer!