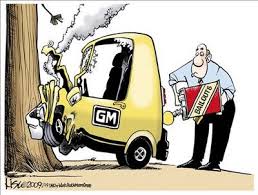 Before I tell you of all the new developments at government motors, I’d like to inform you of the true cost of the GM bailout.  The “official” tally is ten billion, but the actual total cost to taxpayers is over 50 billion dollars.  GM has a market cap (Net worth) of 28 billion.  The paybacks we received from GM are the true, but kind.  Read this for the true costs.

And how did GM show their appreciation to the US taxpayers?  Well, for one thing, they spent 540 million of it to build a plant in Mexico.  Then , they shuttered the Janesville, Wi plant.  You know, the one Obama promised would stay open for the next 100 years?  Then 4 months later, opened a similar plant in China.

Cadillac, a division of GM made a propaganda film, celebrating the ninetieth anniversary of the birth of the Chinese Communist party, spending an undisclosed sum of US taxpayer dollars.

And now for the latest news from our good friends at GM.  They are investing another 691 million in new plants and associated expenses…in Mexico.

So we spend over 50 billion to save a company only worth 28 billion and in a show of gratitude they ship thousands of US jobs out of the country.  Where are the UAW?  If they were truly concerned about their members, wouldn’t they protest this?  Well, no.  Obama paid them off with a 17.5% stake in GM.  (4.9 billion dollars minus kickbacks to the democratic party)  It’s bad enough the union chose to sell it’s soul to the highest bidder, but they also sold the future of many of their members.