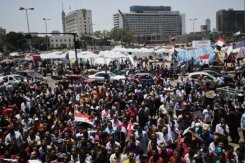 About 1 in 4 Egyptians have now signed a petition to remove President Mohamed Morsi from office and to have a snap election to find his replacement. In order to match that feat in America we would need over 75,000,000 signatures. Could it be done?

I will never say anything is impossible but it’s not likely. It is my belief that our political system is, in some ways, MORE corrupt than Egypt’s. I think the mass division caused by our smoke-and-mirrors “two party system” nearly guarantees that we will never get this many people to unite on anything in America. I heard yesterday that Sarah Palin wants to start a new party. Oh yeah, that will fix everything.

With all due respect I love Sarah Palin but we need another political party like we need a hole in the head. There are already something like 500 political parties in this country and all they do is divide us further. I’d love to see someone like Sarah make a push for people to leave all political parties and start thinking for themselves. This is part of the problem. People don’t think for themselves. So could we get 75 million people to sign a petition against Obama? Again, I will never say it’s impossible. When we give up hope we have nothing. France 24 reports:

More than 22 million people have signed a petition in Egypt demanding the departure of Islamist President Mohamed Morsi and a snap election, the opposition Tamarod (Arabic for rebellion) group said on Saturday.

“Our petition has gathered 22,134,465 signatures,” Tamarod spokesman Mahmud Badr told journalists on the eve of Sunday’s first anniversary of Morsi’s inauguration when it has called for nationwide protests.

This figure is higher than the number of people who voted for Morsi in last year’s presidential election — 13.23 million, or 51.7 percent of the ballots cast.

Previously, Tamarod said 15 million people in Egypt had signed the petition demanding that the president step aside.

Morsi supporters have dismissed the petition as invalid, insisting that only elections can decide whether a head of state stays or goes. His term of office is due to end in 2016.

Egypt’s population is around 88.5 million. So 22 million signatures is about 1 in 4 people. But I think Americans need to completely understand what is happening today in Egypt and why the protests are happening. This is the equivalent of 75 million people signing a petition for the removal of Obama and having him tell us that he was staying until 2016. This is exactly what is happening and it is exactly why extreme violence is likely and the breakout of civil war is not out of the question.

Would Obama make the same statement as Morsi? My bet is that he would but would also likely flee the country as the protests were drawing near. If Morsi is anywhere in Egypt right now, you should expect that he is heavily protected.

It is 4:14 AM (Central Time) as I am writing this and I am trying to get the latest updates but I don’t think I will be able to fight off the sand man long enough to get the information I am looking for. The BBC just offered an update roughly 15 minutes ago but it would seem we are all waiting for the latest. The BBC reports:

Crowds have been gathering in Cairo’s Tahrir Square ahead of a mass rally to demand the resignation of Egypt’s Islamist President Mohammed Morsi.

Thousands spent the night in the square, focus of the protests which brought down ex-leader Hosni Mubarak.

Protests are also expected at the presidential palace in Cairo and across Egypt on the first anniversary of Mr Morsi’s inauguration as president.

His opponents accuse him of failing to tackle economic and security problems.

Supporters of the president also plan to hold their own rallies.

Egyptians have been talking about 30 June for many weeks – the opposition vowing not to leave until Mr Morsi steps downed and calls early presidential elections, says the BBC’s Aleem Maqbool in Cairo.

I want you to think about what is going on here. The Egyptians first had the courage to sign the petition. Secondly they have the courage to protest openly.

My guess is that if their demands aren’t met then they will bear whatever weapons they can muster to try to impose their will by force.

Many Americans are looking at this and thinking they are savages. I am looking at this with a bit of pride quite frankly. I am in no way in love with a nation of people who generally hate us. But I am proud of them for having the guts to stand up to their government.

We can’t get people to sign petitions here because they are either afraid or simply feel they are a waste of time. If we can’t get past step 1 we can not rightfully advance to step 2.

We had a Tea Party protest in Ft. Wayne where literally ONE woman showed up to protest IRS targeting. If we can’t get people to march with signs how are we ever going to advance to step 3 (bearing arms)?

Are Americans more afraid of Obama than Egyptians are of Morsi? I don’t believe so. I do believe that our nation is more brainwashed and divided by our leadership. We have government controlled media, we have severe indoctrination in schools and we have a society full of people with their hands out waiting for the government to throw them a bone. As long as a few bones and table scraps keep coming, people are basically content. They would rather subsist as starving slaves than stand for liberty.

The fight is not gone in America but it is dormant. You won’t be seeing 75 million Americans signing a petition to remove Obama any time soon.

At the same time, we have to wake people up one by one and unless there are a few faithful souls with the guts to try, then we will never have a restoration of lost freedom in this country. We must keep spreading the message and trying to wake people up.

I’d rather die than give up. So go eat your Cheese Doodles and ignore what is going on. We have a leader who is just as corrupt, if not more so, than Mohamed Morsi. The obvious difference is that the Egyptian people are trying to do something about it.