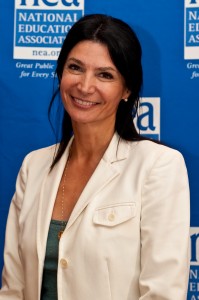 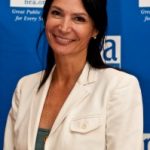 Lily Eskelsen Garcia is an elementary teacher from Utah and  the Vice President of the National Education Association. She also strongly suggests that 2nd Amendment supporters may be headed for eternal damnation. Is this really the message we want coming from our nation’s educators? Do you think that Ted Cruz is going to hell, or you and I for that matter, simply because of belief in the 2nd Amendment? Uber-leftist-cyber-rag MercuryNews reports:

National teachers union leader Lily Eskelsen Garcia offered a prediction Friday about gun lobbyists and politicians who are indifferent to the carnage of gun violence.

“I’m not an ordained minister, I’m not a theologian, but these guys are going to hell,” the National Education Association’s vice president said during a panel discussion at the Netroots Nation convention of liberal online activists.

“We have to make those senators as frightened of us as they are of the gun lobby,” she said. “Shame on us if we give one inch to the gun lobby. They got where they are because they never give up. … Now the movement is us; we are the ones we were waiting for.”

Sounds to me like she just declared a holy war on gun owners. Do we really need to go there? Because though we might have our disagreements I can think of dozens of reasons that liberal idealists may have a downstairs reservation as well.

This is the brainwashing and indoctrination that our kids are going through. America is being destroyed through our educators and somehow we must stop it. Do you want this woman teaching your kids?

Do you really want your children growing up to be like this woman?

These people are expert liars and they can not support their arguments. They do not understand that 27 people in China have now been killed by jihadists WITH KNIVES in gun free zones over the last week. They forget that, on the same day as the Sandy Hook tragedy, a mad man in China stabbed over 20 school children.

It has nothing to do with guns.

This woman is an idiot with an agenda. She does not care about the truth.

We reported recently that the British people now want their guns back. I’m sure they do. They have begun to realize that they now have no way of protecting their families.

Americans will not give up their right to bear arms and it is not open for debate. We have seen what happens elsewhere. We see what happens in our very own cities, like Chicago, as gun laws are tightened.

Even if you are correct Mrs. Eskelsen Garcia, I will cling to my guns long enough to make sure that you get there first. Good luck fighting off the bad guys with your can of mace, or whatever it is that you are recommending. What are you planning to do during the 10-15 minutes that it may take for police to arrive at your house after you call 911?

Our guns don’t kill people. Bad people kill people and they will use a knife, a bomb or anything else they can get hold of in order to make that happen.

American gun owners really should flood the NEA with emails and calls and demand an apology from this woman. I doubt we will get one but it’s still worthwhile to harass those who deserve it.

You can also send an email from here.

I honestly think the woman should be fired for these comments. Using her own liberal ideals against her, she just violated the rights of all Americans by strongly suggesting that there is a heaven and there is a hell.

You can’t shove that Christianity down our throats.

This is Obama’s America where we either quote the Quran or nothing at all.

But sadly, a very large percentage of the population would understand the stupid argument I just tried to make.  I am 44 years old and I can not begin to fathom the world I am living in versus the world I grew up in.

I will continue to cling to my God and my guns and pray for common sense to spread like a virus in this nation because we need it.

That is why I write blog posts. I may never be a household name but if I am part of the solution to bring common sense back to America, then my kids will be better for it.

With teachers like this, our kids need all of the help they can get.