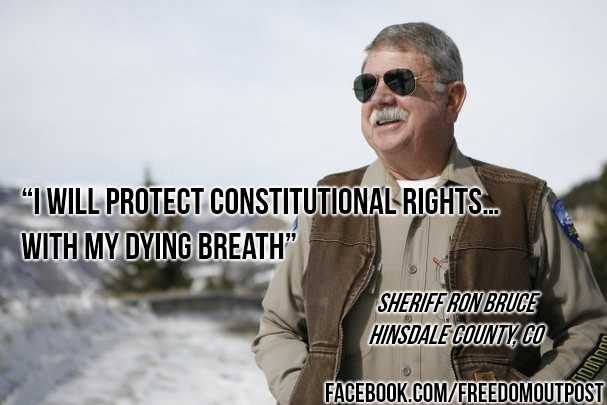 Mayberry is alive and well in America. The heroic spirit of the character of Andy Taylor played by the late Andy Griffith lives on. In May of this year, fifty-five American heroes joined together to fight the battle of their lifetimes. They are all Sheriffs from the great state of Colorado, and they are all upholding the oaths that they took to defend the United States Constitution. Joined by the Independence Institute, these brave men and women are standing against the recent assaults on our Second Amendment rights by Michael Bloomberg. On May 17, 2013, they filed a federal lawsuit against the New York Mayor’s extreme gun control legislation.

In an article published by Colorado Peak Politics, Dave Kopel, the attorney representing the case, requested that community members take the time to thank these brave soldiers in the battle for their freedom. I will take it one step further and ask readers to please keep these brave sheriffs in your prayers and take the following action steps. Included is a list of their names and they will need your prayers in the upcoming days.

The formal complaint states the following:

Peace officers and peaceable citizens join together to bring this action in defense of public safety, the Second and Fourteenth Amendments of the Constitution of the United States, and the Americans with Disabilities Act. Plaintiffs are 54 Colorado elected sheriffs, retired law enforcement officers, disabled individuals, civil rights and disability rights organizations, licensed firearms dealers, associations of law-abiding gun owners, hunting outfitters, and the firearms industry, and a manufacturer of firearm accessories.

Grand County Sheriff Rodney Johnson has since joined the effort, increasing the list to 55.

The list of American heroes includes the name of Ronald Bruce, Sheriff of Hinsdale County, CO. Sheriff Bruce was inspired by the action taken by Sheriff Scott Berry, from Oconee County, Georgia. Sheriff Berry had previously taken a stand against Dana Safety Supply, a major distributor of weapons and accessories to police departments and civilians. Dana Safety Supply issued a statement dated December 26, 2012, saying that they refused further sales to civilians as of that date.

In an email to Dana Safety Supply, Sheriff Berry wrote:

It is my understanding that you have stopped selling self-loading rifles to members of the general public in favor of selling them to law enforcement officers only.

I deeply regret that decision. As such, this agency will no longer seek bids from or purchase from DSS.

Thank you for your time and attention to this email.

A website titled,“Guns Save Lives” published the following list of companies owned by the same Dana Safety Supply.

Sheriff Bruce had posted a picture of himself on Facebook and Freedom Outpost with the following caption,  “I will protect constitutional rights with my dying breath.” To that, I say, “Amen!” All civilian Americans who care about the Constitution and the Bill of Rights should join Sheriff Bruce in that pledge.

I commend these brave men and women for taking a stand and doing the right thing for America. Those who continue to trample on our Constitutional rights are traitors in my book. They will all stand before God someday and give an account of what they did in selling out our Constitution for their short-sighted, personal gain.

Sadly, at least until the lawsuit is resolved, the gun control legislation will go into effect on June 30, 2013. Ryan Parker, of the Denver Post.com wrote,

A preliminary injunction hearing for parts of the law banning high-capacity ammunition magazines that hold more than 15 rounds — including the “readily converted” language, which could apply to removable base plates — is set for July 10.

“Parts of the (magazine ban) law are so vaguely written, sheriffs are unsure which magazines are legal and which are illegal,” Kopel said.

If the injunction is granted, those aspects of the law addressed in the hearing would be prohibited from enforcement until the entire lawsuit is resolved.

We the people must stand together and lock arms with these brave sheriffs. Further, we need to send this article to our own sheriffs in every county in America. We need to ask each and every county sheriff if they will indeed stand by the oath that they took to defend our Constitution. When they answer you, post their response on Facebook and all other social network sites. Let them know that you are doing this and that you are holding them accountable. These are practical action steps that you, the American citizen can take to restore and preserve freedom in our great nation.

We all see the domino effect started by Sheriff Berry. These dominoes need to be placed upright in every Sheriff’s department in America. The buck stops with the Sheriffs. They are America’s last outpost of freedom. Pray for them. Stand with them. Together, we can all keep the spirit of Mayberry alive in our hearts. These brave sheriffs deserve our support. Let’s remember them this Independence Day and let’s do our part as citizens by contacting our local sheriff’s departments. May God bless these brave men and women, may God bless you, and may God bless America!

This article first appeared on Lady Patriots. Laurie Sterling is a staff writer for Lady Patriots and guest contributor of The D.C. Clothesline.