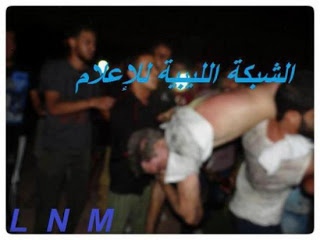 As new information is finally starting to leak out about what really happened in Benghazi on that fateful night of September 11, 2012, NOTHING is more telling than this one single photograph…for this photograph proves that Ambassador Christopher Stevens did NOT die of smoke inhalation in the embassy compound as was claimed by the Obama administration, but was taken alive, raped, sodomized, and God only knows what else…and Barack HUSSEIN Obama, Hillary Clinton, and all those in their vile orbit knew this from day one and all bold-faced lied.

They all willfully, deliberately, and with malice LIED to Ambassador Stevens’ family and to ‘We the People’. And while we all know that some claim that Stevens was the middle-man in Obama’s gun and weapons running operation to the Syrian rebels, or that he was actually kidnapped to trade for the Blind Sheik and mistakenly killed, I believe that what I will tell you about this picture coupled with Obama’s cover-up and LIES, gives credence to my belief (one that I’ve had since day one) that Ambassador Steven’s found out Obama was running guns and weapons under the table to the al-Qaeda supported Syrian rebels, and was silenced before he could expose what Obama was doing.

Before I get to the photograph we must let the lead-up facts speak for themselves.

First, we all know there was NO spontaneous mob protest outside the consulate as Obama claimed for the first two weeks after the attack. Mob violence that got out of control because of an anti-islamic YouTube video he said, but a video that few had actually seen, that is until he went on Pakistani TV bloviating and apologizing for it after the fact. And with both former CIA Director David H. Petreaus and then Secretary of State Hillary Clinton both knowing beyond a shadow of a doubt that NO video was involved, they both bold-faced lied to Congress when first questioned, claiming that it was the video and the video alone that caused the attack. But I hate to tell them …NO I’m happy to tell them…lying under oath is a felony…an arrestable offense.

Second, Obama and crew still continue to claim there was NO warning of an impending attack issued by our Benghazi consulate. LIARS…there were many calls fearing an attack was imminent sent out by NOT only the Benghazi consulate and Ambassador Stevens himself, but also by our Tripoli embassy. Stevens sent out numerous pleas for help in the days and hours before the attack, because he knew of and feared the significant number of well-armed militias, all with ties to al-Qaeda, that were roaming the area around Benghazi. Also, remember that just a few months before, in June of the same year, a terrorist attack on the British Ambassador to Libya was attempted (thankfully it failed) causing both Britain and the International Red Cross to close their Benghazi offices…and the Red Cross just does NOT pick up and run without justification.

Those events in June alone should have served as a warning to Washington that our consulate and our people were in danger.

Third, fast forward to September 10th, when al-Qaeda head honcho Ayman al-Zawahrin publicly called on Libyans to seek revenge for the killing of a Libyan al-Qaeda leader, and that the next morning, September 11th, Libyan so-called ‘police officers’ who were supposed to be helping guard the compound were seen taking pictures of the inside of the compound. In fact, Ambassador Stevens sent an e-mail to DC that morning stating that he found this picture taking “troubling” and received NO reply. Now add in that on the afternoon of September 11th, the Blue Mountain Security manager, whose company also provided some of the guards for the Benghazi compound, sensed something was wrong and put out an alert via radio and cellphone, and according to media reports, there were roadblocks and check points set up well in advance of the attack because of his alert.

Fourth, our response to all this was to send up an unarmed surveillance drone over the consulate compound about 90 minutes AFTER the attack started…the very drone through which Barack HUSSEIN Obama watched our people being slaughtered…which of course he claimed he NEVER did. And if you believe that I’ve got some swamp land to sell you, because (and this is my belief alone) this man had to make sure Stevens was killed one way or the other so his ‘secret’ would be safe…so rest assured he saw it all.

And now remember all the conflicting reports of orders being issued or orders NOT being issued to ‘stand down’. I say ordering forces that were prepared to assist during an on-going attack to ‘stand down’ or NOT giving go orders at all to units ready, willing, and able to assist is NOT an act of negligence as some are trying to claim, but borders on…if NOT is…an act of treason.

And so, General Carter Ham, then commander of AFRICOM whose jurisdiction took in Benghazi, testified last week about that fateful night during a closed door hearing before the House Armed Services Committee, but isn’t it odd that NO reports of his testimony have been reported on…NONE whatsoever by any of the news media…just reports on the testimony of underlings…hmmm…

What we do know at this point is that two Marine anti-terrorist teams based in Rota, Spain, were ready to go assist in Benghazi, but reports claimed that it would have taken the first team 23 hours to get to Tripoli (which is an out and out LIE for while the two locations are 1,553 miles apart they’re only 3 hours 5 minutes apart in flight time), and that the second team was NEVER deployed because they were told that US personnel had been evacuated from Benghazi…another LIE because NO one had been evacuated and NO one was sent in to evacuate anyone. And isn’t it also odd that NOT one of these supposed ‘evacuees’… survivors actually…eye witnesses to the day’s events…has been seen or talked to by any media outlet…convenient huh. Also, there was a 130-man, fully armed Marine Force-Recon unit on the ground in Sigonella, Sicily, that could have been in Benghazi in 1 hour and 14 minutes, for the two locations are only 610 miles apart, but was NEVER called to do so.

So, with General Ham testifying in a closed-door session with the House Armed Services Committee, we still CANNOT get word of what his testimony entailed, but underling Lt. Col. S.E. Gibson said his commanders…and who pray tell were those commanders…told him to remain in the capital of Tripoli to defend Americans in case of additional attacks, and to help survivors being evacuated from Benghazi…but at that time NO one was being evacuated as the consulate was under heavy attack with NO help coming to either aid or rescue them.

And even with this testimony, even if the actual words ‘stand down’ were NOT uttered, the bottom line remains that with NO help forthcoming…with all parties involved making excuses for why help couldn’t be sent…this proves there was a total lack of military response to Ambassador Stevens’ pleas for help even with what the drone overhead was showing, and that in and of itself is an order to ‘stand down’ as far as I’m concerned.

Now to the photograph itself and remember this is NOT a newly released photograph but a photograph now seen differently, because one main point in this photograph has been overlooked by all…until now that is. Remember reports by a Libyan doctor claimed Stevens died ‘at the consulate’ of “severe asphyxia,” sometimes known as smoke inhalation, but results of an autopsy done on Stevens’ body after it was returned to the US have NOT been made public to either prove or disprove that. And then known al-Qaeda terrorist Abdallah Dhu-al-Bajadin piped in claiming Stevens was killed by lethal injection ‘at the consulate’, and while some do NOT discard that as a possible cause of death that too has NOT been proven or disproved, again because our government has NOT released our US done autopsy results. But no matter as neither of those scenarios is the truth because Ambassador Stevens did NOT die at the Benghazi consulate…he died…NO he was MURDERED… after being taken very much ALIVE from the consulate and at the direct hands of the enemy…an enemy aided by our president…and here’s the proof…

Notice Ambassador Stevens being carried by the barbarians…notice his right arm hanging down limp…now notice his bent left arm up by his face trying to either protect his face, cover his eyes, or even wipe tears from his eyes, but guess what…dead men do NOT wipe tears from their eyes nor do they try to cover their faces…NO…AMBASSADOR STEVENS WAS ALIVE NOT DEAD FROM SMOKE INHALATION and NO crap that he died at the hospital…and NO nonsense that maybe rigor-mortise had set in to bend his arm because that takes hours to happen and the time frame for that just isn’t here. This man was NOT being taken to a hospital after death as claimed but was dragged ALIVE through the streets, raped, sodomized, brutalized, and murdered by these muslim bast*rds, and this is why NO official US autopsy reports have been released. This fact had and still has to be hidden at all costs for Stevens being alive at this point could very well blow Barack HUSSEIN Obama’s cover-ups of why that night in Benghai happened.

Bottom line…our miserable muslim sympathizing president and his equally miserable former Secretary of State both NOT only LIED to us all about the reason for Benghazi, but also covered-up the cause of Ambassador Stevens’ death and everything relating to Benghazi. And that, I believe, is grounds for immediate arrest for treason.