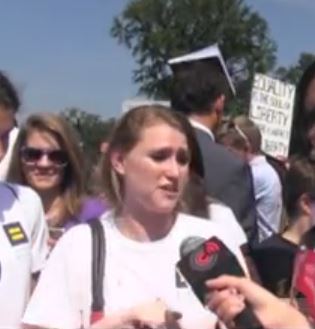 Last Wednesday morning, as America awaited the Supreme Court’s decision on the Defense of Marriage Act (DOMA), a group of  Leftwing college students showed just how “tolerant” and respectful of “diversity” they are.

Katherine Timpf reports for Campus Reform, June 26, 2013, that the pro-homosexual marriage students liberally spewed their intolerance and hatred for supporters of traditional marriage.

This female student (top right)  calls us “hideous” and “disgusting” and says that she “feel[s] nothing for them at all. I don’t feel bad that they are upset.”

Another female student (below) calls supporters of traditional marriage “a meeting of the flat world society” who should get with the times because “It’s 2013.”

Then there’s this self-satisfied student (below, in red t-shirt) who insists homosexual marriage is all about “love,” whereas supporters of traditional marriage are just mean nasty “haters.” I can’t figure out what gender it is. Whether it is a he or a she, he-she can lose some fat!

College education is such a mind-broadening experience! [Snark]

If these college students are the future of America, we’re even more doomed than we already are.

See FOTM’s other posts on the Supreme Court’s DOMA ruling: