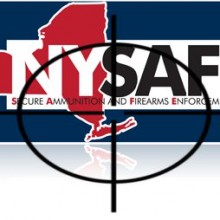 Aaron Weiss, an Iraq combat veteran and law enforcement officer, spoke to the motion to repeal New York’s SAFE Act at the Dutchess County Legislature back in March of this year. Weiss, from Poughkeepsie, took to the podium and denounced the sweeping measures of the tyrants in New York asking them “Why is dead children your battle cry?”

Weiss said that he had attended the previous meeting in regards to the resolution to repeal the massive gun control law known as the NY SAFE Act, signed into law earlier this year by Governor Andrew Cuomo. His attendance at the first meeting was simply to hear what everyone had to say. He remained silent, but not on this day.

“I heard some shocking things from some people and some legislators,” Weiss said of the previous meeting. “They said it took a lot of courage to pass the SAFE Act. Apparently, my definition of courage differs from yours.”

“You see,” Weiss continued, “if it was really so courageous a bill, and it took so much courage to pass it, then why was it done in the middle of the night when no one could see it or read it? That’s not courage. That’s a mafia style sit-down to divvy up what’s good for the bosses.”

“Courage,” he added, “is taking the right and true course of action, not the politically expedient one and anyone who is proud of this law must also be proud of the PATRIOT Act, the TSA (Transportation Security Agency), imprisoning Japanese citizens in World War II, since all these actions were spurred on by emotional fear and rammed through in the name of public safety.”

He then took a direct shot at all the anti-Second Amendment politicians who used the tragedy of Sandy Hook to advance their agendas.

“Another issue is the insistence of certain people to stand on the graves of dead children and challenge those that disagree to say it to the parent’s faces,” he blasted. “Well, I, for one, will pick up that gauntlet.”

“First off, why is ‘dead children’ your battle cry?” Weiss asked passionately. “You didn’t say anything about the hundreds of Chicago children being killed and for some reason you only screamed when it happens to wealthy white ones.”

“And yes, I’ll say to anyone’s face,” Weiss added, “my right is more important than your dead, because I fought for it first hand. I washed the blood of my friends out of my Humvee and I picked up their mangled bodies and I fought day in and day out.”

Weiss was visibly emotional recalling his military service and the deaths of fellow soldiers on the battlefield.

“I did more things than people can imagine,” he said. “So, yeah, my right trumps your dead.”

“I earned it in blood!” Weiss proclaimed. “I gave up a lot for this country, including my youth, and better men than me gave up a whole lot more so that all of you, myself included, could enjoy the rights that are guaranteed to us in our Constitution and Bill of Rights.”

“We didn’t go through all of that to come back home and watch you surrender what we fought for happen based on the demented acts of a couple of mad men,” he chided.

He then closed out his comments by addressing the legislators who were specifically going to vote against the repeal resolution. He said that he understood that they would vote based on “some misguided sense of the public good.” However, he questioned, as a law enforcement officer, their true resolve.

In Weiss’ words, “Since voting to take away someone’s rights is totally different than being asked to enforce it, I want you to consider this. If you support the SAFE Act so whole heartedly, are you willing to stand with law enforcement members who lead from the front to enforcement? What I mean by that is if a constituent of yours feels so alienated by this law and the manner in which it was passed and they refuse to comply with it, are you willing to stack up on their front door and go in first?”

“I bet if a clause was in this bill that required you, the elected leadership, our elected leaders to go in the door first, I bet you would not be so steadfast,” he said in a forceful conclusion.

Those listening erupted in applause as a call came up, “Can we have some quiet in the chambers please so that we may continue on.”

This is what it’s going to take, more people not being silent or just sitting behind the keyboard griping, but going before their legislatures and giving voice to your grievances against them for their tyrannical moves. Aaron Weiss is taking the stand that patriots of the past have taken. Will you?