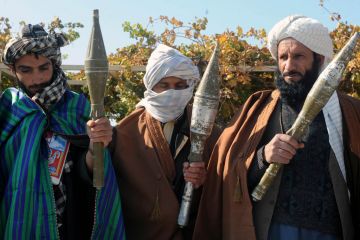 To say that President Obama has squandered the painful gains America won over the last decade in two, bloody Middle Eastern wars is something like saying Jimmy Carter was not quite as a good a president as George Washington or Ronald Reagan, for that matter.  It would be a gross understatement.

Historians have observed that war accelerates history.  We can look around the Muslim world and not only see that it is convulsed by rebellion, murderous civil war and anarchy, but that the previous order in the Middle East, which was imposed by the allies at the close of World War I, is rapidly disappearing.

Just as the borders of totally new nation states such as Iraq, Syria, Jordan, and Lebanon were drawn up by the victorious colonial European powers in 1918, the vacuum left by America’s retreat, combined with Obama’s ineptitude, is again changing the map of the Middle East, and is doing so at light speed.

In 2008, ninety years after the formal dismemberment of the Old Ottoman Empire, the high-water mark of America’s influence in the Middle East was ended by Barack Obama when he promised that if he was elected president, he would order a new military surge in Afghanistan and would end our war in Iraq within sixteen months.

As Tom Donnelly of the Weekly Standard points out, it’s ironic that 2008 was the year that George Bush’s surge ended the civil war in Iraq. Donnelly believes, and I agree, that from the moment the newly elected President Obama announced that he would make good on that campaign promise to withdraw from Iraq, our allies and our adversaries understood that America was willing to discard its hard-won gains in the region and leave.

After all, wasn’t it central to this president’s stated ideology that he detested, and would dismantle American hegemony everywhere it existed?

It’s no surprise that since our official withdrawal in 2011, dismally bad news continues to pour out of Iraq.  Sectarian war is breaking out all over the country. With the tacit approval of the Maliki government, Shiite militias are conducting terror attacks against their Sunni political rivals.

On April 23, in the city of Hawijah they attacked an otherwise peaceful Sunni protest, killing 53 and wounding 200 unarmed men, women, and children.  Word has it, that those protesters not killed or severely wounded have now joined the armed Sunni Insurgency.

The Sunni members of Al Qaeda in Iraq (AQI) are responding by carrying out spectacular attacks against Shiite targets. On June 10, using their signature car and truck bombs, they attacked the cities of Hillah, Madain, Nasiriya, Kut, Basra and Bagdad resulting in 180 dead.

Our man in Iraq, Prime Minister al Maliki, a member of the Shiite majority, personally initiated the beginning of Iraq’s civil war now raging between the Shiite and Sunni clans and tribes.

In 2011, on the very day that the bulk of American troops began departing from Bagdad, Maliki ordered the arrest and torture of the bodyguards of his chief political rival, Tariq al-Hashemi who was his vice president and is Sunni.

Currently, al Hashemi is living somewhere in exile and is very lucky to still be alive. He has been sentenced to death in absentia on terrorism charges based on the coerced testimonies of his bodyguards against him.

Our pursuit of Jeffersonian democracy in Iraq is a dead issue.  President Obama’s failed strategies in Iraq have ensured that increased rebellion, civil war and anarchy will remain alive and well.

This week in Syria, forces loyal to Assad continue to kill rebels and take ground. With the help of Russia, Hezbollah, Iran, and Shiite militias from Iraq, the Assad regime captured the important crossroads town of Qusayr which lies south of, and cuts off the more important city of Homs. If regime forces take Homs and retake Aleppo, the effect on opposition moral could be crushing.

Meanwhile, word was leaked to the press that the CIA is moving American weapons from secret locations into Jordan.  These weapons, combined with special-forces trainers will be aimed at strengthening the Sunni Free Syria Army (FSA).

In an interview with the Wall Street Journal, General Mithkal Albtaish, a leader of the FSA who defected from the Syrian army last year, stated that he had recently persuaded 60 Syrian rebels to shift their allegiance from the al Qaeda-linked al Nusra to his command.  He added that roughly two-thirds of his 12,000 troops are not Islamist and those who are, remain fairly moderate.

The prospect of these weapons falling into the hands of jihadists, smuggled into the US and then used to bring down domestic airlines is seen as a true nightmare scenario by homeland security officials.

In my next issue of this column, I will explain how such an attack has already happened…and was covered up by our own government and at its highest levels.  Look for more information from me next week, about the downing of TWA Flight 800 on July 17, 1996.

Also this week, as the widely- respected UK-based Syrian Observatory for Human Rights calculated that the Syrian death count had risen past 100,000, the far less-respected Susan Rice bid her adieu from her job as the US ambassador to the UN.

In her out-going address, Susan Rice blamed the UN Security Council’s failure to act for the loss of life in Syria.  As a member of Obama’s trusted inner circle, one wouldn’t expect Ms. Rice to know thateffective administrations build coalitions of allies outside the UN so that when necessary, they are prepared to act.

We wouldn’t expect her to understand that UN Security Council members, Russia and China will always vote against America’s “mildest resolutions” if they can block or limit American interests and strengthen their own. As I wrote in my book, Lessons from Fallen Civilizations, Bin Laden selected September 11 as the day to attack America because it was a great anniversary in the history of Islamic conquest of the Christian Infidel.  It was the day before the battle for Vienna. Bin Laden picked the date 9/11, because he knew that there was a great yearning among vast numbers of the faithful and world-wide members of the Muslim Brotherhood, to reestablish a new, even greater transnational caliphate that could unite all the soldiers of Allah and rival the Christian Infidel West. Muslims were united by the 9/11 attack on the United States. Photo source: http://goo.gl/8XYba

The Muslim Brotherhood has had its chance to begin that great unification process in Egypt which is Islam’s most populous country.  With a little help from Obama, Egypt’s Muslim Brotherhood president, Mohammad Morsi, has called for a new caliphate among fellow Sunni Islamists. The new caliphate in Egypt is experiencing two problems.  Its economy is crashing and Egyptian society is descending into chaos. As Judith Miller reported for News Max, “Shortages of diesel fuel have generated riots… Electricity blackouts are frequent…By summers end, the government may lack sufficient reserves to import wheat, a heavily subsidized staple of Egypt’s poor.”

The significance of this should not be underestimated.  It is profound. There is also a great irony in Egypt’s gross mismanagement.  While Obama is pulling American troops out of Afghanistan, where we are fighting real terrorists, Obama has now offered Morsi, a supporter of terrorism, American riot troops to protect his regime. Perhaps the vacuum left by America’s retreat and Obama’s ineptitude will leave the oil-rich Middle East to be scavenged by the vultures, the jihadists, and their rogue-state allies who are the rulers of Syria, Iran, and Russia.  But perhaps what we are witnessing in Egypt is the awakening of the first Muslim reformation which could change everything.