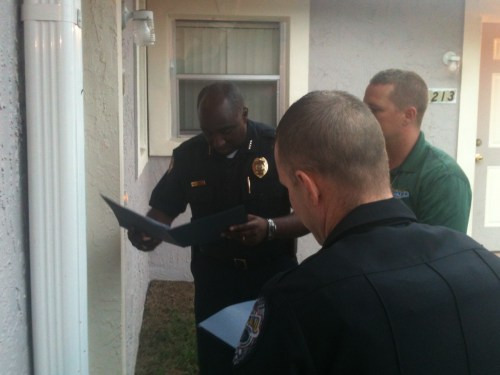 Sanford, FL — where George Zimmerman is on trial for murder for the death of teenager Trayvon Martin — has become another Watertown, Massachusetts.

Recall that on April 19, 2013, Watertown became an armed police state. Police in riot gear blanketed the small suburb of Boston, going door-to-door in search of the remaining bombing suspect Dzhokhar Tsarnaev, by bursting into homes with guns drawn, and marching residents out with their hands raised above their heads like criminals. (See “Boston Bombing: Getting the sheeple used to the police state,” April 23, 2013.)

Now cops are doing that again, in Sanford, FL.

As WND reports, July 1, 2013, only this time at least they are knocking on doors instead of knocking them down.

While the media has portrayed Zimmerman as white, he actually has a Hispanic heritage.

Police say they fear a violent backlash from the community when the Zimmerman jury verdict is delivered. Los Angeles had days of rioting when the Rodney King verdict came down.

So Sanford Police Chief Cecile Smith sent cops to go door-to-door talking to people. Smith said, “Our worst fear is that we’d have people from outside the community coming in and stirring up … violence.”

Authorities are seeking help from local pastors in their campaign, too.

What police did in New Orleans during hurricane Katrina was even worse than in Watertown, MA. There, officers simply went into homes and confiscated weapons they uncovered.

Thousands of weapons – legally obtained and owned – were simply grabbed from citizens after New Orleans Police Superintendent P. Edwin Compass III announced, “Only law enforcement are allowed to have weapons.”

One man at a post-Katrina meeting assembled in conjunction with the National Rifle Association said, “The bottom line is this. Once they did it, they set a precedent. And what we’ve got to be sure [of] is that the precedent stops here.”

In a series of videos, the National Rifle Association has documented the stunning weapons grab by police in New Orleans, assembling videos that show them physically taking weapons from individuals, including one woman who was stunned when officers threw her against her kitchen wall because she had a small handgun for self-defense.

Go to the WND article for the videos. Here’s one I found on YouTube: