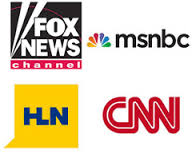 There is reason for celebration at CNN. In the second quarter of 2013 they moved into second place among cable news

I mean, we had an IRS scandal, Benghazi hearings, Edward Snowden and the NSA scandal, the AP scandal, the Boston bombings, the explosion in West Texas, riots in Sweden, protests in Egypt, etc. I can’t list everything. There has been a ton of news. I think we could all agree on that.  With world renowned journalists like Reverend Al Sharpton and Rachel Maddow I just can’t imagine this swing in ratings.

The Nielsen ratings must be rigged. After all, Piers Morgan suffered his second lowest quarter ever. How can that be? This man is a genius and a second amendment expert. How can that happen? Have people stopped caring about guns all of the sudden?

Even with Pier Morgan’s decline we must take our hats off to CNN for coming in a  embarrassing second place. Check out these numbers and prepare to laugh. These numbers are quoted from Nielsen and appeared on Hollywoodreporter.com yesterday:

Let’s have some fun with the Primetime numbers. If you add up the numbers from CNN, MSNBC and Headline News on an average night they bring in 1,760,000 viewers. In other words Fox News Network has more viewers than those three networks combined.

As the changing of the guard takes place and CNN officially passes MSNBC for second place the chants can be heard all across the Eastern seaboard.

This hardly qualifies as news really. The reason I wanted to print it is simply because I am not sure how many people realize the disparity in the numbers.

The left may control 90% of the media outlets in this country, but people that are still capable of independent thought will always find a source of the truth.

This was the 46th consecutive quarter that Fox News has won the battle of cable news networks. That’s 11 1/2 years. Impressive.

By the way, I will continue to bust their chops (Fox News) any time they fail to report an important  story. I am not always happy with Fox News, but still this is another victory for the good guys. They are on our side MOST of the time and that’s a start.