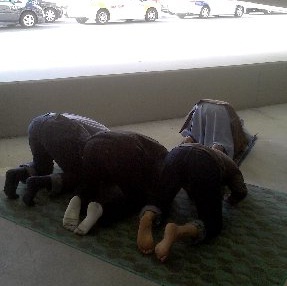 As if things couldn’t get any more ridiculous as more and more Americans pander to Islam, San Francisco International Airport has constructed a special prayers space for Muslims in which they can wash their hands and feet before they pray.

While the adherents to Islam are required to offer prayers five times a day, along with a ritual that also calls for a ceremonial cleansing, many San Francisco cab drivers are unable to accomplish this apparently in bathroom facilities. At least that’s what it sounds like they want us to believe.

For many cab drivers, that’s meant either lugging bottled water around or using one of the bathrooms inside the terminal to wash — a practice not always welcomed by airport passengers.

So Royal Cab driver Hasan Khan, 52, a Pakistani immigrant, collected some 300 signatures from fellow cabbies, urging the airport to give them their own cleansing station.

Airport brass obliged — and the wash equipment was installed on the ground floor of the main garage, right next to where the drivers congregate for their breaks.

Airport spokesman Doug Yakel said, “The way we look at it…this was in the interest of maintaining a good relationship with ground transportation providers.”

Ah, but did they use public money? Yes they did.

Mr. Yakel says that those resources were nominal, with work done by in-house plumbers.

So how does this square with the very people, many who live in San Francisco, who are always crying “Separation of Church and State”? Apparently they are just fine with it.

In fact, Khan realizes that not everyone will appreciate the facility or their tax dollars being used to construct it. He must have read my mind.

He then attempts to state that Christians generally pray at Church on Sundays. While that may be true for “professed” Christians, those of us who take the Scriptures seriously pray daily, often many times, but I don’t see airports making room for that. Khan tries to say that because Muslims pray five times daily that it’s different for them as it’s woven into their daily routine.

“We are very happy,” said Ahmed Algazali, 49, a fellow driver from Yemen as he prepared to join Khan for a late-afternoon garage prayer.

How long do you think this will take to catch on America? Not that I expect the people of San Francisco to oppose any of this simply because it’s not Jewish or Christian, but I do find it ironic that they would allow Muslims such a generous tax-funded offer. However, I’m sure this is nothing that a pound of bacon could rectify.

Calls to SFO to find out the amount of money used have not been returned.