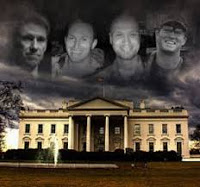 Benghazi…the ghosts of Ambassador Christopher Stevens, Information Officer Sean Smith, and ex-Navy SEALS Tyrone Woods and Glen Doherty haunt me at times…haunt me because I know they CANNOT Rest in Peace while their killers roam free to continue to NOT only dishonor their memory but also to dishonor the soul of ‘We the People’.

While I am NO investigative reporter I can connect the dots, and I can through deductive reasoning see truth hiding in a pile of nonsense…and ‘We the People’ are being fed just that…nonsense…by the Obama administration. And the worst part is that Barack HUSSEIN Obama and those who orbit around him know we know and simply don’t care.

Over this almost year since that fateful night I have written many opinion pieces on the happenings at the consulate and given my supposition of why Benghazi happened in the first place…supposition first based on nothing but a gut feeling immediately after it happened but now being given credence by a chain of events that just CANNOT be ignored. I will now link them altogether and you tell me if what is my truth…(that Ambassador Stevens found out Obama was running guns and weapons to the al-Qaeda supported Syrian rebels under-the-table and was going to expose him, and so had to be silenced before he could)…is not ‘THE’ truth.

In the days and weeks leading up to September 11, 2012 Ambassador Stevens sent numerous e-mails to Washington, specifically to Hillary Clinton’s State Department and to Hillary herself, begging for help for he was nervous after the thankfully failed attempt on the British Ambassador’s life, but that these e-mails were ignored or deemed NOT relevant.

Now for the Obama version and time frame with my ‘truth’ in red italic.

According to the Obama bunch, the American consulate at Benghazi was attacked on September 11, 2012 by a spontaneous group of protesters (in reality it was attacked by a heavily armed muslim terrorist group comprised of between 125 and 150 gunmen using rocket-propelled grenades, RPGs, hand grenades, AK-47s, FNFT2000 NATO assault rifles, diesel canisters, mortars, heavy machine guns, and artillery mounted on gun trucks). The attack began during the night at the compound built to protect the main diplomatic building.  A second attack early the morning of the next day targeted a nearby CIA annex in a different compound, and that’s where the four Americans died…but in reality where three Americans died (for Ambassador Stevens did NOT die there as claimed, he died after being taken very much ALIVE from the consulate and at the direct hands of the enemy for the bloody hand prints on the consulate walls are from someone who is being carried trying to hold on to whatever they could for dear life…as witnessed by the finger streaks pointing into the consulate…and in pictures showing a ‘supposedly’ dead Stevens having his left arm shielding his eyes or wiping tears from them, and dead men do NOT shield or wipe tears from their eyes).

Washington was informed about the attack just as it was beginning at about 9:40 local time (3:40PM Eastern Time). By 4:30 Eastern, Pentagon officials informed Defense Secretary Leon Penetta and Obama about the attack. The Pentagon then ordered an unmanned drone to fly over Benghazi. The drone arrived at 11:10 pm local time (5:10 pm Eastern Time) and began a video feed to Washington. At 5:41 pm Eastern Time, then Secretary of State Hillary Clinton telephoned CIA Director David Patreaus to decide on a course of action…a course of action that amounted to NO help whatsoever (and here is where it starts to get dicey for Penetta, Clinton, and Obama all insisted that military forces were too far away to get to Benghazi in time to help. These three spoke an hour or so after the start of the attack yet Panetta told the Senate, under oath, that at that time the decision was made that help would NOT get to Benghazi in time…and to that I say how could they know that NO help would get there in time because how could they know how long the attack would be going on).

Telling his staff to handle the ‘incident’ occurring at Benghazi, Obama went to bed (or so he claimed) while the attack was still ongoing saying he had to leave early the next morning for a fund raising trip to Las Vegas. (Now here is what I find odd…what were Obama’s whereabouts in the 8 or so hours he claimed to be sleeping and why knowing there was a phone in his bedroom did he, the president of the United States NOT ask someone…anyone…to keep him abreast of the deteriorating situation at the consulate knowing Americans were in danger. Did he really go to his bedroom NOT to sleep but to contact someone in Libya to make sure Stevens was dead…remember my supposition previously stated…and if so who did he contact during those hours, because his total lack of concern for his diplomatic staff is quite unnerving leading one to believe his actions heralded the start of a cover-up.).

Could Obama always have known that an attack would happen and what the outcome of the attack would be (because he knew what had to be done to Stevens) and the time frame it would occur in, thus allowing him to leave when he did, so he could say, ‘I had nothing to do with whatever went wrong and you can’t prove I did because I was in bed sleeping’. From Obama’s track record we know where his loyalties truly lie I would NOT doubt for a minute that his actions or lack thereof speak volumes for remember, the following morning, even after finding out the tragic outcome of the night’s events, off to Las Vegas he went.

Between September 11th and 17th, eight other diplomatic missions in the Middle East, Asia, and Europe were subjected to violent attacks (supposedly) in response to that poorly done YouTube video that criticized mohammad. And remember when on September 16, 2012, US Ambassador to the UN Susan Rice went on five Sunday morning talk show circuit peddling the Obama approved ‘talking points’ that the Benghazi attack occurred because of said video (which she knew very well was NOT the case as those ‘talking points’ were changed at least 12 times to correspond with Obama’s movements on that fateful night.).

And after it was proven that NO video of any kind had anything to do with what happened at Benghazi the blame game started, but instead of putting the blame where it belonged…as on Barack HUSSEIN Obama and Hillary Clinton…we were treated to Hillary’s testimony before the House Committee investigating the Benghazi attacks. Remember when she said (after recovering from her ‘boo-boo’) the words that stunned the nation, “With all due respect, the fact is we had four dead Americans. Was it because of a protest or was it because of guys out for a walk one night decided to go kill some Americans? What difference at this point does it make?” “It is our job to figure out what happened and do everything we can to prevent it from ever happening again.”

Remember when whistleblower Gregory Hicks, the deputy chief of mission at the US Embassy in Libya, told congressional investigators that there were two possible courses of action that could have saved American lives that night…allowing US special forces to enter Benghazi and flying a fast-moving U.S. military aircraft over the scene of the attacks…and remember that a team of US special forces in Tripoli was blocked from flying in to attempt a rescue of the embassy personnel…remember when we found out that that a Marine anti-terrorist team based in Rota, Spain, was ready to go assist in Benghazi, but reports claimed that it would have taken them 23 hours to get there when the truth is it would have only taken 3 hours and 5 minutes to get there.

Remember all that and now remember all the diversions to keep our attention off of Benghazi…the scandals…scandals ranging from the AP scandal to the IRS scandal to NSA scandal…each and every one used and manipulated to keep us away from the fact that only Benghazi is a true arrestable offense…that only Benghazi is grounds for treason being leveled against both Barack HUSSEIN Obama and Hillary Clinton…that only Benghazi is treason for aiding and abetting the enemy as in my supposition of Obama secretly running guns and weapons to the al-Qaeda supported Syrian rebels…and that supposition has now become an in-our-face reality that we taxpayers are footing the bill for.

So it’s NOT Hillary’s job to figure out what happened the night of September 11, 2012…it’s ‘We the People’s’ job to make sure that those who were indeed complicit in Benghazi are brought to justice…and that really boils down to Barack HUSSEIN Obama and Hillary Clinton…and only when that becomes reality can the ghosts of Ambassador Christopher Stevens, Information Officer Sean Smith, and ex-Navy SEALS Tyrone Woods and Glen Doherty finally Rest in Peace.