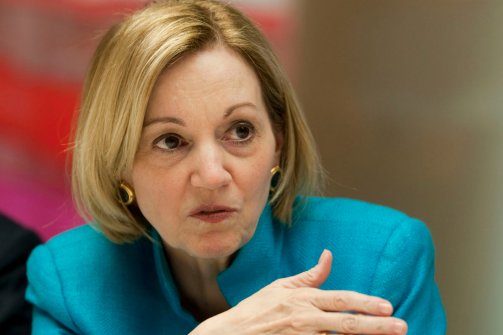 There are always two stories in America. There is the one that comes from Obama’s mouth and then there is the truth. The truth of the matter is that this administration was “all in” on a Muslim Brotherhood controlled Egypt. You can’t trust a word they say now that Morsi has been overthrown. Although I have little doubt that Obama would gladly throw Morsi, or anyone else, under the bus for his own benefit, we should not be so sure that this administration is done with The Muslim Brotherhood. There are reports coming from a very respected journalist in the Arab world that Anne Patterson is turning up the heat and vowing to apply pressure:

Evidence that the Obama administration is unhappy with the Egyptian people’s liberation from Muslim Brotherhood rule continues to emerge.  As reported today by Youm 7, according to Muhammad Heikal — “the Arab world’s most respected political commentator” and for some 50 years a political insider — soon after the overthrow of Morsi, U.S. ambassador Anne Patterson assured Hisham Qandil, who hours ago was Egypt’s Prime Minister, that “there are many forms of pressure, and America holds the keys to the Gulf.”

Such blatantly pro-Muslim Brotherhood assurances by Patterson are consistent with many of her other actions in Egypt, which have led most Egyptians, including politicians and activists, to refer to her as a Brotherhood stooge.  Among other things, in the days leading to June 30, she called on Egyptians not to protest — including by meeting with the Coptic Pope and asking him to urge the nation’s Christian minority not to oppose the Brotherhood, even though Christians have naturally been the most to suffer under Morsi, especially in the context of “blasphemy” accusations.

Thus, and once again, the Obama administration makes indubitably clear that its primary interest in Egypt is to see the Muslim Brotherhood stay in power, the Egyptian people’s will — the will of tens of millions of secularists, liberals, moderates, and Christians — be damned.

News from the Arab world last week was that Anne Patterson was accused of being part of a Muslim Brotherhood “sleeper cell.” Regardless of the veracity of that accusation, which was made by a former member of Egyptian Parliament, we have to realize how much effort this administration had put into supporting Morsi and the brotherhood.

So what do you think? Are we done? Or is this administration just putting its money on a new horse from the same stable?

That is the fear of many. If you see Obama start to strongly support a new leader in Egypt you might be looking at another potential terror-loving-tyrant. Let’s not forget that there is strong evidence that Morsi is responsible for Benghazi and Obama was his accomplice.

It’s a very convenient time for Morsi to go I would think. The evidence was starting to mount and now he is gone.

Egypt is not our ally. Morsi was Obama’s ally but he was not America’s ally. The people of Egypt generally hate us and so do their political leaders. It’s great that we had the chance to send jets, tanks and 1.5 billion dollars into this mess. I would have hated to think that the chaos was not properly armed.