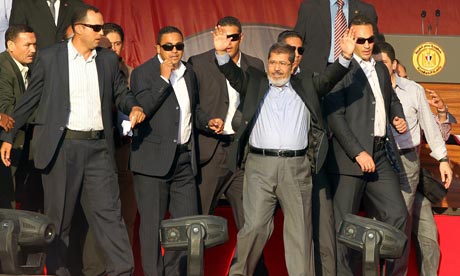 I am sick of everyone rushing to pat the people of Egypt on the back. They got rid of a crook.  It doesn’t make them good people who are interested in global freedom. I have been following this land of idiots for a while now and before Morsi was overthrown no one seemed to care. I cared because of all of the money we were sending them. I had to know what that money was supporting.

These people are not at all what you think. Here is a good example…

You probably don’t realize that one of Morsi’s promises was to free the Blind Sheik. The B.S. is an icon to terrorist wannabes all over Egypt. The fact that Morsi didn’t deliver is one of the reasons they are upset. You won’t hear that on mainstream media channels. The Wall Street Journal reported a year ago:

Egypt’s President-elect Mohammed Morsi made a nod to his base in a speech on Friday when he pledged to seek the release of Sheik Omar Abdel-Rahman from U.S. custody.

Sheik Abdel-Rahman, who is better known as the “blind sheik” is serving a life sentence at a federal penitentiary in North Carolina for his role in planning the 1993 bombing of the World Trade Center in New York City.

Not in my book.

In a World Public Opinion poll Egyptian people agreed at a 61% rate that terrorist attacks against Americans are justified. It’s true. They hate us.

Pew Research did a poll last year of Muslims world wide. Here are some numbers for Egyptians:

So I am supposed to make these people out to be heroes? Don’t be surprised if the guy that replaces Morsi is worse. People are making a lot out of nothing. You will hear what the press wants you to hear but the truth is that a lot of people wanted Morsi gone because he was too soft.

That is something you won’t be reading in very many places. This is a typical Militant Islamic society where women are treated like dirt, the only good Christian is a dead Christian, they hate Americans and all Western Cultures, they feel that Sharia Law is the only way, etc.

Other than that they are basically heroes for liberating their country from Morsi.

The numbers do not lie. Are there some good Egyptian people? Sure there are. But that society as a whole is not something I am ready to applaud. Shame on anyone who does.