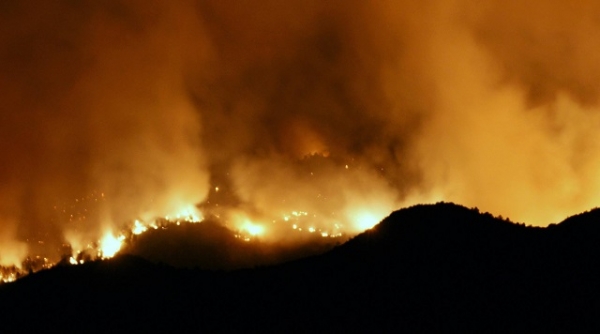 Oh the many facets of jihad! Now we’re seeing fire jihad in America. According to reporter David Barnett, a Palestinian jihadist group, Masada al Mujahideen, has recently claimed credit for the ongoing wildfires in Arizona in a statement that was posted to a jihadist forum on Wednesday.

The statement, titled “Masada al-Mujahideen Fulfilled its Promise and Attacked America Again After the Expiration of the Period with Fires that Achieved Historic Results,” was obtained and translated by the SITE Intelligence Group.

“We had previously announced an unconventional war against the occupation state of Israel, and then we escalated this war to reach its main supporter, America, so that it receives a major share of it, which will destroy their flora and fauna, with permission from Allah and then with our hands,” the group said.

The statement further said that the group targeted the United States “in order to make it clear and to make it know we can reach it when we warn it, and to make it certain that our hands don’t just reach it but also strike it.”

The group warned that the attacks “will not be the last…if America does not respond to our demands.” The statement boasted that 19 firefighters had been killed in the fires.

Authorities contradict Masada al-Mujahideen’s claims, saying that they believe the fires were started by lightning.

Whether their claims are true or not is anyone’s guess. However, Pamela Geller points out:

The devout Muslim group, Al Qaeda, has long urged the setting of forest fires as a form of jihad (holy war). Spring 2012: al-Qaeda’s English-language online magazine, Inspire, published an article called “It Is of Your Freedom to Ignite a Firebomb,” which featured instructions on how to build an incendiary bomb to light forests on fire.

What should disturb everyone is that anyone would claim responsibility for such atrocities, especially these guys, right? They’re from the “religion of peace” (Yes, there’s loads of sarcasm laced in that statement.)