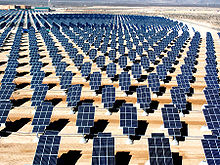 Obama has issued his energy policy.  Basically it says, spend hundreds of billions in subsidies for rolling blackouts and crippling rates.  He plans on raising the standards for coal generation plants, to the point they have to close down and planned new plants will have to be scrapped.  He plans on replacing it with wind and sun power.  He has made claims it will produce millions of new jobs and will fundamentally change the US economy in a way it’s never been before.  But change is not always good.  Valley Forge is a prime example.

One day, George Washington addressed all the men at Valley Forge.

“Men, I have good news and I have bad news.  The good news is you will all get a change of underwear.”

Our bad news won’t be nearly as good as that.  All we need to do is look at the countries Obama has told us we need to be more like.  We’ll start with Germany, who decided to be the world’s leader in sun power.  After spending 130 billion dollars, Germany now gets just .3% of their electricity from solar.  Next year that number will double.  It is expected to cost an average of $26o dollars month more for every German family.  Remember, doubling capacity means they will now get .6% of their electricity from solar.  Good deal, huh?

Germany has the second highest energy rates in the world, or about 3 times what we currently enjoy.  The only country with higher rates is Denmark, who decided to be the wind capital of the world.  Wind has its own problems.  You have to build a separate generation plant to process the wind power.  But over and above that, you also need to build a natural gas generation plant for when there is no wind or when winds are too high to operate the wind turbines safely.

Denmark has something else in common with Obama’s energy policy.  Carbon taxes are not new.  Denmark, Sweden, Finland and Norway have had carbon taxes since the 1990s.  If the tax has cut emissions, then the cut is too small to measure.  In Norway, emissions have actually increased by 43% per capita.  Denmark is the only country where carbon emissions have dropped and that by only 15%.

The carbon tax is not a deterrent to emissions.  Companies continue doing business and the tax, which is really a revenue enhancer, is paid and passed on to consumers.  The Danes pay about four times what we do for electricity.  In Denmark, the politicians don’t see the carbon tax as a way to raise money to spend more.  They turn the money back to industry and it can only be used for improving equipment and updating emission cleansing.  But do you really want to see your electric bill rise by 400%?

The third highest rates are paid by the UK, who also decided to “clean up the environment.”  So, how did that work out for them?  Can you say double dip recession and people freezing to death when the country ran out of heating gas this past winter.  Despite the extra cost, emissions are now lower in the UK.

Even though their electricity rates are not as high as some other countries, the country hurt the worst by pursuing renewable energy is Spain.  As a result of the rising costs of electricity from wind and solar, Spain lost their manufacturing base.  And jobs?  For every green job created, they lost 2.2 other jobs and to make matters worse, only one in ten green jobs are permanent.  Spain is constantly teetering on bankruptcy and their unemployment rate is now 26.8%.

Let’s face it. Obama , who has failed in every area of his presidency, is going to double down to the detriment of the US citizens.  I’m sure illegal aliens will get subsidies for their energy.