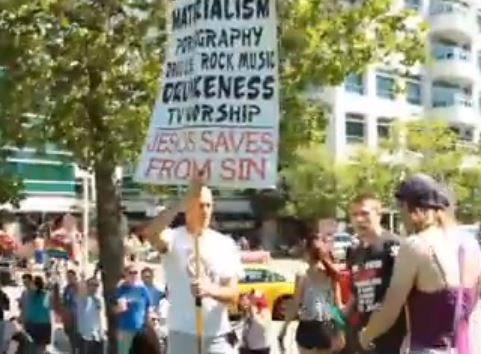 At a  homosexual Pridefest in Seattle last Sunday, June 30, 2013, two Christian street preachers — one holding a sign reading “Repent or Else” and “Jesus Saves from Sin” — were viciously attacked by a group of people.

Michael Harthorne reports for KOMO News that Seattle Police bicycle officers heard a loud debate between two groups of people near 4th Avenue North and Broad Street, but inexplicably chose to ignore the commotion to continue on their way.

Sign-holder (l) and the other Christian protester (in black t-shirt on right).

According to a video shot by a witness, “Rogue Reflections,” after the bicycle police officers left, the crowd continued to yell at and shove the religious protesters.

Militant lesbian screams at the sign-holder

Militant lesbian screams at sign-holder, while a man tries to block Queree from attacking sign-holder.

Then a group of women tried to steal the protester’s sign, after which a group of men grabbed the sign and pulled the protester to the ground while the crowd applauds. That’s when Queree pummeled the sign-holder in the back of the head multiple times.

Militant lesbians converge on sign-holder trying to grab his sign.

Finally, after the fight was broken up, the bicycle police officers returned to the scene and arrested 36-year-old Jason Queree, who was booked into King County Jail.

A 22-year-old, also from Marysville, shown in the video grabbing the protester’s sign and kicking him while on the ground, was also arrested and later released. Both men are facing possible misdemeanor assault charges.

Queree has an extensive criminal record, having been arrested 29 times since 1995, convicted for nine felonies (including forgery, stolen property, unlawful firearm possession and theft) and 12 misdemeanors (including driving with a suspended license, vehicle prowl, domestic violence, assault, DUI and criminal trespass).