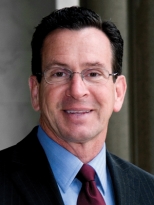 Connecticut Governor Dannel P. Malloy is looking to oust the most outspoken, pro-gun rights member of the Board of Firearms Permit Examiners. According to M. Peter Kuck, a strong Second Amendment supporter, he is being targeted by Malloy to be removed, but has no intention of going quietly into the night.

“This is a continuing attempt to put their thumbs on the balance of justice,” Kuck said after he found out that Malloy was attempting to get nominees to replace him on the board.

Apparently the governor is not only targeting Malloy, but other Second Amendment supporters on the board as well.

Andrew Doba, a spokesman for Malloy, said “We are currently reviewing all of the expired terms on the board. The governor has made no secret of his efforts to improve public safety. Clearly, his work on the gun violence prevention bill was a huge step forward. But making sure the spirit of that law is reflected in the Board of Firearms Permit Examiners must be a part of that effort as well.”

Kuck has a consistent record of voting to overturn local police chiefs and granting pistol permits.

“The term of office for members of the Board is coterminous with the Governor that appointed each such member,” Malloy wrote to Edward Tytor, president of Ye Connecticut Gun Guild, a group for gun collectors that is entitled by statute to a spot on the board. “Your representative to the Board, M. Peter Kuck, was last appointed by Governor M. Jodi Rell, and, as such, his term has expired.”

Malloy asked the Guild to provide the names of four nominees.

“I looked at that letter and started to laugh,” Kuck said Monday, “because I’ve been there, done that already.”

Kuck was first appointed to the board by Gov. John G. Rowland in 1998. After M. Jodi Rell became governor, she asked the gun guild to provide the names of three nominees for the spot. Kuck, who is treasurer of the guild, said the group replied that it was not obligated to identify multiple nominees, “and if she didn’t like that, we’d send up three names, and they’d be Peter Kuck, Peter Kuck and Peter Kuck.”

Kuck suspects the guild to adopt the same stance this time around.

“I think Peter’s done a good job, so why change?” Tytor said. “I think if I know the membership pretty well, that it will be nearly unanimous that we want Peter to continue this fight.”

Kuck has called the state’s legislators “stupid, bloody damn fools” for their revising a semi-automatic rifle ban and though he has been ridiculed over his stand, Kuck says “I’d rather be a loose cannon than a rubber stamp.”

Many gun rights advocates have seen the governor’s move as that to upset the balance of the board in favor of anti-gun members.

Rich Burgess, president of Connecticut Carry, said “This is yet again a brazen attack on the rights of the people of Connecticut. Governor Malloy is simply not satisfied with his overreaching and unconstitutional gun ban implemented in April. Now he is using alternative means to try and remove rights from law abiding people by denigrating a good man.”

Kuck seems confident that he will still be on the board a year from now. “Yes, I will be,” he said. “If there’s a Board of Firearms Permit Examiners, I’ll be there.”

As we’ve reported in the past, following the shooting that took place at Sandy Hook Elementary School in Connecticut, lawmakers heard from many citizens that told them more gun control would not solve the problem. They heard from Mark Mattioli, whose six year old son James was killed in the shooting, as he told lawmakers “gun laws are not the problem. The problem is lack of civility.” They also heard from Bill Stevens’ whose fifth grade daughter attended Sandy Hook as he told lawmakers that he was determined to protect his Victoria with his guns and that they would have to take his gun from his cold dead hands! They even heard from legal immigrant Henson Ong, as he schooled them on the history of the United States and recounted statistics and legal precedent that demonstrates the illegal nature of legislation that lawmakers were considering, as well as the detriment to society by removing law-abiding citizens’ liberties.