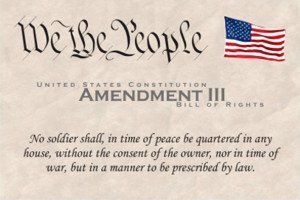 Many on the left like to claim that the Constitution is a living document which must change with the times. They like to use the words of Thomas Jefferson in their attempt to convince the right that this is the case by quoting words he wrote in a letter to James Madison that “I am increasingly persuaded that the earth belongs exclusively to the living and that one generation has no more right to bind another to it’s laws and judgments than one independent nation has the right to command another.”

And in a sense they are right but what they either neglect to mention, or are ignorant of, is the fact that the Founders provided the proper means within the Constitution to alter the Founding Document if the people thought it was time for a change, and that measure is called the amendment process, not the judiciary, and that is where the left errs in their argument. The Constitution can be considered a living document only in the fact that the Founders created a means within which the document can be changed, the problem is the manner in which the left seeks to change the document.

As an example of this they like to site the 3rd amendment for that is by far, in my opinion, the easiest amendment to discount in today’s world.

Because the 3rd amendment was written at a time when American subjects were forced to quarter British soldiers against their will so how can that possibly be relevant in today’s world? Surely the United States does not live in the fear of an invasion and so the American people do not have to worry about quartering soldiers against their will in a time of peace, which renders the 3rd amendment obsolete, right?

Not so fast. A couple in Nevada is suing the city of Henderson for a violation of their 3rd amendment right because they were arrested simply for the fact that they refused to let local police use their house to spy on their neighbor.

Police officers contacted Anthony Mitchell on July 10, 2011, with a request to use his house as a lookout while investigating his neighbor. When Mitchell told police that he did not wish to be involved, the complaint alleges, police decided they would use the residence anyway.

According to Courthouse News Service, the police department decided that if Mitchell refused to leave or open the door, officers would force their way in and arrest him.

Mitchell claims this is exactly what happened. First officers “smashed open” Mitchell’s door with a “metal ram” after he did not immediately open it himself. He then “curled on the floor of his living room, with his hands over his face,” as the police shot Mitchell and his dog — which the family claims did not attack the officers — several times with “pepperball” rounds.

Pepperball is a projectile containing chemical irritant pepper spray, which is released upon impact.

Afterward, Mitchell was arrested for “obstructing a police officer.”

So, is this a violation of the 3rd amendment? Does the 3rd amendment only concern soldiers, or would that also include law enforcement? As someone who feels the Constitution is only a living document because of the fact it can be amended I would have to say that ‘soldier’ means ‘soldier’ and this is likely a case which will not be won on those grounds.

However, I still think this speaks to a larger issue here: When you couple this story with what we saw in several towns following the Boston Marathon bombing–defacto Martial Law and the forcible searching of homes against the will of some homeowners–then you factor in the IRS targeting scandal, the NSA spying program, the NDAA, the FAA Reauthorization Act and the potential use of 20,000 drones flying over American cities, and you have to believe the soft police state Americans have been living under for several years is quickly becoming a hard police state.

And it does not end there because we are routinely seeing many of our rights violated on a seemingly daily basis: The 1st amendment is under attack by both political correctness and an attack on public worship, as well as the National Government forcing religions to act against their faiths under the guise of affordable healthcare. And we are also seeing both the Republicans and the Democrats setting up free speech zones in front of their events, as if there is such a thing as a non-free speech zone. The 2nd amendment, well we see that one attacked by opportunistic politicians all the time. The 4th amendment is being violated by both the NSA spying scandal and the TSA every time somebody wants to travel. The 5th and 6th amendments are being violated by the NDAA and the drone policy which Eric Holder admitted allowed the killing of American citizens without charges and without a trial. And of course there is the 10th amendment, which for all intents and purposes has been relegated to obscurity and irrelevance over many years.

These are all examples of what can happen when the constitution is considered to be a living document subjected to the whims of the court instead of the amendment process and it is about time for the American people to wake up so they never have to explain to their children what is was like to once live in a free country.

James Madison once wrote, “I believe there are more instances of the abridgment of the freedom of the people by gradual and silent encroachments of those in power, than by violent and sudden usurpations” and I think we are coming to see this pass right before our very eyes.