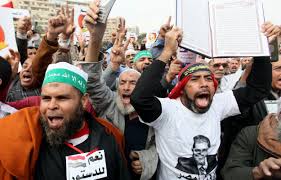 And so it began as the Muslim Brotherhood’s promised ‘Friday of Rage’ turns into a day of killing and bloodshed.

Doing what they do best…mayhem, violence, and murder… ‘the brethren’ were out in full force all across Egypt as these supporters of ousted president Mohamed Morsi called for acts of terror after the military ousted their puppet president…and they did just that.Committing these very acts of violence and murder even as Muslim Brotherhood spokesman Ahmed Aref spewed out the lie that in spite of all the brutal repression and excessive violence that killed and injured thousands of pro-democracy, pro-Morsi demonstrators across Egypt,…which NEVER happened by the way…he said the Muslim Brotherhood would remain committed to peaceful protests and restraint.

NO…I don’t think so for even as Aref outwardly called for peaceful protests and restraint, ‘the brethren’ were busy killing at least 30 people and injuring hundreds more (the body count at the time I write this but sure to rise)…including 12 who died in Alexandria when hundreds of islamists tried to break up a rally by opponents of Morsi… as violence spread across Egypt…violence being egged on by Muslim Brotherhood leaders both behind closed mosque doors and in the public venue.

Leaders like Mohamed Badie, the supreme guide (spiritual leader) of the Muslim Brotherhood, challenging thousands of radical islamic loyalists to fight back against the military and anti-Morsi factions by saying, “The coup is illegal and we will never accept its results…we sacrificed so dearly to reach this point, and we will never return to the past again.” With these words Badie was also challenging the Egyptian army to “return to the arms of the nation.” Saying, “God make Morsi victorious and bring him back to the palace…we are his soldiers we defend him with our lives,” Badie shows that violence and hate are at the heart of everything the Muslim Brotherhood does.

Now add in the voice of Mukhtar Al-Ashri, Chairman of the Muslim Brotherhood’s Freedom and Justice Party’s (FJP) Legal Committee, who said, “What is happening is a flagrant violation of freedoms, persecution a political faction based on political perspective – something which the whole world must condemn. These repressive measures will not succeed in thwarting justice or falsifying facts no matter the size of the spin, or how vast the tapestry of lies,” and you can clearly see that the Muslim Brotherhood agenda is NOT that of the Egyptian people.

These barbarians…and the Muslim Brotherhood and their offshoots are indeed barbarians…just do NOT get that the Egyptian people do NOT want to return to the dark ages of sharia law nor to the modern reincarnation of jihad against all who do NOT believe. The Egypt people want freedom NOT enslavement to antiquated ideals that chain the hearts of men to subjugation, intolerance, and hate.

And with the leaders of the protest movement insisting that what happened just a few short days ago was NOT a military coup but a peaceful demonstration of the will of the people who rallied to achieve and complete the original goals of the revolution against Hosni Mubarak…’bread, freedom, social justice and human dignity’…groups like the Muslim Brotherhood become outdated dinosaurs in the modern world who can only achieve their radical islamic agenda through violence, terror, and murder.

And so amidst yesterday’s self-started day of violence and rioting, supporters of Morsi and the Muslim Brotherhood, who claimed to
be demonstrating in support of democratic, constitutional, and ballot-box legitimacy, issued their own sets of demands included in a 4-point statement:

1. Reinstatement of the legitimate elected President in accordance to the Constitution and the law.
2. Cancellation of all unconstitutional coup-related decisions, decrees and actions announced by the military council with which it usurped power.
3. Reinstatement of the Constitution approved by the people, and starting a dialogue for consensus on amendments thereof.
4. Holding accountable all officials responsible for oppressive tactics used, including the killing of demonstrators, the arrest of political leaders, and the closure of satellite TV channels.

In other words they issued a set of demands counter to everything the overthrow of Morsi had accomplished, including wanting a reinstatement of Morsi’s islamic driven constitution with sharia as law of the land. But that seems highly unlikely even as islamic extremists call for more violence to help them achieve their goal of turning Egypt into an islamic state…an islamic caliphate.

And in the volatile Middle East that could help set the stage for more people taking control of their own destinies and throwing aside the barbaric, brutal, political system that hides behind the guise of calling itself a religion…the political system of oppression know as islam.

We proud infidels can only hope…

This article originally appeared on Lady Patriots. Diane Sori is a staff writer for Lady Patriots and a regular guest contributor to The D.C. Clothesline.