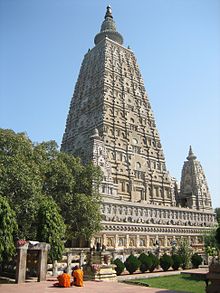 Bodh Gaya is the holiest site for the Buddhists world over. It was bombed early Sunday morning in a series of Islamic terror attacks. Their most holy site. The Muslims prohibit the Jews from praying at their most holy site (the Temple Mount), not to mention their false religious claims to Jerusalem. The Muslims are converting one of the most important monuments of Christianity, the 6th-century Church of Hagia Sophia, into a mosque. Tens of thousands of Hindu temples have been destroyed by Muslims.

But Robert Spencer and I are banned from Britian because we discuss such things. Such is poison fruit of a world held hostage by savages.

“It is a terror attack,” Union minister of state for home RPN Singh said about the blasts that took place between 5:30 and 5:58am. A Buddhist monk is carried on a stretcher for treatment after he was injured in a blast in Bodhgaya, about 140 kilometers southwest of Patna. AP

Sources in the ministry of home affairs said there had been intelligence of a possible attack on the temple and Bihar was alerted last month.

The Intelligence Bureau (IB) had alerted the state that two terrorists, brothers originally from Bihar but based abroad in recent years, had entered the state to carry out terror attacks, according to an official aware about the intelligence input.

According to intelligence sources, Bodh Gaya has been in the crosshairs of Pakistan-based terrorists, who want to avenge violence against Rohingya Muslims in Buddhist-dominated Myanmar.

The police said crude explosives were used for the low-intensity blasts. No structural damage was reported to the 7th century temple, which is regarded as one of the holiest Buddhist shrines and is a Unesco World Heritage Site.

Buddhists from all over the world visit the temple, which has the Bodhi tree under which Buddha is said to have attained enlightenment.

“The holy Bodhi tree is safe and there is no damage to it,” said Bihar director general of police Abhayanand.

While four blasts took place inside the Mahabodhi Temple complex, three occurred at the Terega monastery, the usual abode of the 17th Karmapa, Ogyen Trinley Dorje, whenever he is in town, the police said.

The Karmapa – head of the Karma Kagyu school, one of the four main schools of Tibetan Buddhism – was not in Bodh Gaya at the time of the blasts. Broken windows at the Bodh Gaya Buddhist temple complex after the blasts. (AFP)

A blast also took place near the base of an 80-feet-tall Buddha statue and another went off inside an empty tourist bus, bearing Uttar Pradesh registration, parked close to the temple complex. Gaya City superintendent of police Chandan Kushwaha said two live bombs were recovered from the area – one of them near the 80-ft Buddha statue – and defused.

The Centre rushed experts from the National Investigation Agency (NIA) and the National Security Guard (NSG) to the site of the blasts. Bihar chief minister Nitish Kumar condemned the blasts and rushed to Bodh Gaya, about 140 km southwest of capital Patna. He admitted the IB and other security agencies had alerted the state government about the Mahabodhi temple complex being in terror crosshairs, but evaded questions on lapse in security.

Kumar said he would request the Centre to deploy the Central Industrial Security Force (CISF) to take over the security of the temple complex. “This is the appropriate agency for the job.”

Last year, security of the Mahabodhi temple was handed over to the special task force of Bihar Police.

No terrorist outfit has claimed responsibility for the attack so far. Gaya is also a Maoist stronghold.

Bodh Gaya is a high priority area and always has an adequate amount of security cover. Pilgrims are thoroughly checked before they enter the temple.

Investigators are trying to ascertain the point of security breach.

Attacks on Buddhists are rare in India but there have been tensions in the wider region recently following clashes between Buddhists and Muslims in Myanmar, Sri Lanka and Bangladesh.

The complex attracts visitors from around the world during the peak tourist season from October to March.