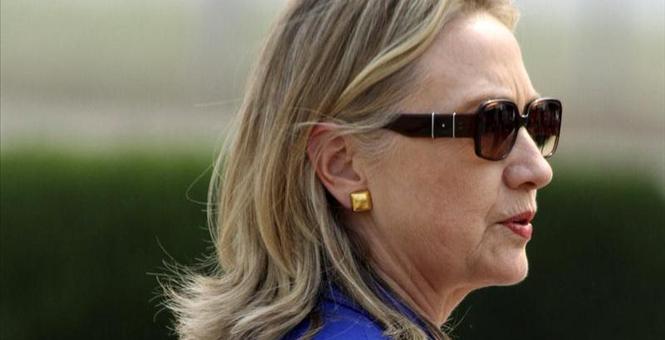 I’m fairly sure we all have a really good idea of who might have motive to break into the law offices that represent State Department whistleblower Aurelia Fedenisn. The ink on the campaign posters is not yet dry but it appears that the Clinton 2016 campaign slogan may be “Sex, Drugs and Breaking & Entering.” Folks this was insane a long time ago. We are running out of adjectives to describe this mess. Video surveillance picked up footage of a mystery break in at our whistleblower’s chosen law firm.

The offices of a Dallas law firm representing a high-profile State Department whistleblower were broken into last weekend. Burglars stole three computers and broke into the firm’s file cabinets. But silver bars, video equipment and other valuables were left untouched, according to local Fox affiliate KDFW, which aired security camera footage of the suspected burglars entering and leaving the offices around the time of the incident.

The firm Schulman & Mathias represents Aurelia Fedenisn, a former investigator at the State Department’s Office of the Inspector General. In recent weeks, she raised a slew of explosive allegations against the department and its contractors ranging from illicit drug use, soliciting sexual favors from minors and prostitutes and sexual harassment.

“It’s a crazy, strange and suspicious situation,” attorney Cary Schulman told The Cable. “It’s clear to me that it was somebody looking for information and not money. My most high-profile case right now is the Aurelia Fedenisn case, and I can’t think of any other case where someone would go to these great lengths to get our information.”

According to the KDFW report, the firm was the only suite burglarized in the high-rise office building and an unlocked office adjacent was left untouched.

For those who missed the scandal of the day back on June 10th, Fedenisn is the whistleblower who broke the underage prostitution and drug ring problems that have evidently run rampant through our state department. If you need a refresher on that story you can click here.

On June 19th, Steven Ahle reported that Fedenisn has been the target of intimidation tactics:

Her attorney made the charges that federal officers camped outside her house, harassed her kids and tried to get her to incriminate herself.  What crime did she commit?  Actually, none.  But that doesn’t stop the Obama gestapo from threatening anyone willing to reveal their criminal nature.  Her separation from the State department included a clause that allows her to talk about corruption within the State Department and the documents she produced are not classified.

Before she came home, the two agents took turns harassing her two children, a boy and a girl, both in their teens and never once identified themselves.  Fedensisn’s lawyer, Cary Shulman, revealed that officials from the State Department informed him that they were going to have a no nonsense sit down with the Department of Justice, intimating that they planned to file charges.  This was an obvious attempt to scare his client into silence.

And we wonder why more people don’t come forward? In Ahle’s article he also put forth the possibility that the source of the intimidation may be long-time Clinton confidant Cheryl Mills. Mills is believed to be the source of intimidation that kept Gregory Hicks silent about Benghazi as well.

So did Hillary Clinton send her goons to break into the law offices of Schulman & Mathias? If she did then she might be slipping off of her game. Let’s not forget that Hillary and Wild Bill are the same people that found 46 of their closest associates silenced in much more creative ways back in the 90’s.

But if Hillary isn’t responsible then who is?

They could have Hillary and Bill on tape and waving at the camera and I am not sure it would matter. Those on the left would say that the images were a hoax.

It certainly does look suspicious however. I would say that there was something to gain by finding the right files and computers no matter who the perpetrator may have been.