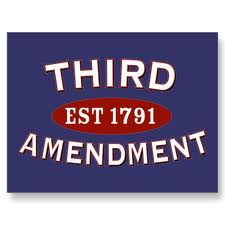 As a preface, the Third Amendment reads:

No Soldier shall, in time of peace be quartered in any house, without the consent of the Owner, nor in time of war, but in a manner to be prescribed by law.

According to Courthouse News:

The family claims, “”On the morning of July 10th, 2011, officers from the Henderson Police Department responded to a domestic violence call at a neighbor’s residence.”

“At 10:45 a.m. defendant Officer Christopher Worley (HPD) contacted plaintiff Anthony Mitchell via his telephone,” the family’s complaint states. “Worley told plaintiff that police needed to occupy his home in order to gain a ‘tactical advantage’ against the occupant of the neighboring house. Anthony Mitchell told the officer that he did not want to become involved and that he did not want police to enter his residence. Although Worley continued to insist that plaintiff should leave his residence, plaintiff clearly explained that he did not intend to leave his home or to allow police to occupy his home. Worley then ended the phone call.”

The family then claimed that David Cawthorn, Worley and Waller “conspired among themselves to force Anthony Mitchell out of his residence and to occupy his home for their own use.”

Just before noon five of the defendant officers assembled in front of the Mitchell’s door to execute their plan.

These tyrants then allegedly aimed their weapons at the young man and shouted obscenities at him ordering him on the floor. Obviously frightened, he dropped the phone and prostrated himself on the floor.

The police then addressed the young man as “a**hole,” shouted conflicting orders at him. The complaint then stated, “Although plaintiff Anthony Mitchell was lying motionless on the ground and posed no threat, officers, including Officer David Cawthorn, then fired multiple ‘pepperball’ rounds at plaintiff as he lay defenseless on the floor of his living room. Anthony Mitchell was struck at least three times by shots fired from close range, injuring him and causing him severe pain.”

The officers then arrested him for obstructing a police officer, searched the house, moved furniture and then set up shop to stakeout the Mitchell’s neighbors without authorization.

The officers then hurt the family’s pet dog for no reason whatsoever. Sam, the family’s female dog, cowered in the corner after the door was smashed. Although the terrified animal posed no threat to officers, they gratuitously shot it with one or more pepperball rounds. The panicked animal howled in fear and pain and fled from the residence. Sam was subsequently left trapped outside in a fenced alcove without access to water, food, or shelter from the sun for much of the day, while temperatures outside soared to over 100 degrees Fahrenheit.

Anthony and his parents live in separate houses on the same street. Apparently though the officers treated his parents in a similar manner.

As if this was not enough, Courthouse News adds:

“Officers had no reasonable grounds to detain plaintiff Michael Mitchell, nor probable cause to suspect him of committing any crime.”

The defendants then entered the back yard of the Mitchell’s around 1:45pm and banged on their door. Mrs. Mitchell opened the door and told the officers that they could not enter the house without a warrant, but they ignored her. One officer seized her by the arm as the others entered the house. Then the officer led her outside her home as another officer began going through her purse without probably cause or a warrant.

When the Mitchell’s returned home after it had been occupied by the officers, they found water from their dispenser had been used, the refrigerator door was left open, mustard and mayonnaise was left on the floor and their cabinets had been gone through.

Anthony and Michael Mitchell were then taken to jail and booked for obstructing an officer. They remained in jail for at least 9 hours, before they were bailed out! Then criminal charges were dismissed with prejudice.

No discipline was carried out on these officers and they claimed the Mitchell’s were simply providing cover for their neighbors.

The Tenth Amendment Center has more on the implications of the Supreme Court ruling in this matter.

If this story has gotten your anger aroused as it has mine, give the City of Henderson Police a call and let your voice be heard on behalf of the Mitchells. Demand that every officer involved by immediately terminated and brought up on criminal charges. Their contact information is below: