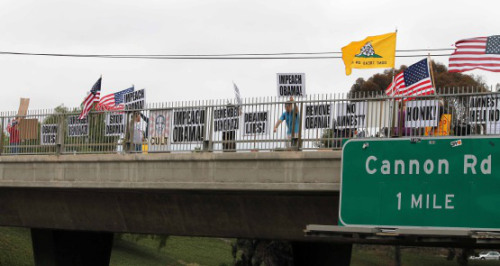 This is news you never heard/saw on the State Controlled Media.

Do you remember that stupendous “Impeach Obama” demonstration on a California freeway overpass last June?

On June 8, 2013, a group stood on an I-5 overpass in the seaside city of Carlsbad in North San Diego County, California, holding signs saying “Remember Benghazi,” “Obama Lies” and “No Amnesty.” Traffic slowed down for miles (but quickly picked up after the overpass), with many motorists honking their support.

SoNSanDiego reports that “in San Diego, the CHP ordered protesters to remove their signs and flags from the fence, or they would be removed by CalTrans and thrown in the trash. We refused, telling the CHP that we prefer THEY take down these signs and American flags on Independence Day and throw them in the trash, while we videograph the act.”

Similarly, the police harassed another overpass protest in LaVerne, CA, saying that holding a “carnival” on an overpass was prohibited. SoNSanDiego says, “An Obama-thug showed up at the demo, saying he was from the “planning commission” and ordered the signs taken down.”

Despite the harassment from police, that first “Impeach Obama” overpass demonstration has started an entire movement that is spreading like wildfire across America!

As reported by Dean Chambers for Examiner.com, July 6, 2013:

In just a few short weeks, Overpasses for Obama’s Impeachment has grown from the Founder, James Neighbors, to movement with groups preparing protests in all 50 states across America. Neighbors announced today that the protests are spreading across the country. The rapid growth of this new grassroots movement illustrates how strongly citizens across the country feel about the need to hold the president accountable for his actions in so many areas.

Inspired by the protests in Carlsbad, Cal. Earlier this year on June 8, Neighbors created the page on Facebook, which now has a following of thousands with vastly more protesters in individual states organizing and preparing to take to the overpasses and streets across America in protest.

Neighbors estimates that over 12,000 people across America have joined the movement since it began in mid-June and believe the protests will force Congress to act and begin the process of impeaching President Obama.

On August 6th, the Overpasses for Obama’s Impeachment groups will stand together for synchronized protests across the nation in what the group has named “The Patriot Wave,” beginning in the Eastern Time zone, and culminating on the West coast.

Neighbors emphasized that the protests will continue on a national level every week during the Patriot Wave, and at dates across the nation as determined by their state organizers. […] – Continued at Examiner.

Here are some links to find an “Overpass for Obama’s Impeachment” in your area: