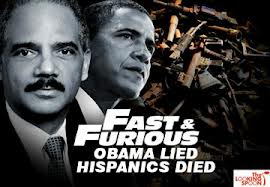 In a long line of hundreds of dead Mexicans, including a Mexican beauty queen, two dead federal agents and a plot to assassinate a police chief, Barack Obama and his Attorney General Eric Holder’s Fast and Furious scandal has produced another death. This time one of the weapons from the Fast and Furious gun running operation was used to kill a Mexican police chief in the state of Jalisco earlier this year.

According to the LA Times:

Luis Lucio Rosales Astorga, the police chief in the city of Hostotipaquillo, was shot to death Jan. 29 when gunmen intercepted his patrol car and opened fire. Also killed was one of his bodyguards. His wife and a second bodyguard were wounded.

Local authorities said eight suspects in their 20s and 30s were arrested after police seized them nearby with a cache of weapons — rifles, grenades, handguns, helmets, bulletproof vests, uniforms and special communications equipment. The area is a hot zone for rival drug gangs, with members of three cartels fighting over turf in the region.

A semi-automatic WASR rifle, the firearm that killed the chief, was traced back to the Lone Wolf Trading Company, a gun store in Glendale, Ariz. The notation on the Department of Justice trace records said the WASR was used in a “HOMICIDE – WILLFUL – KILL –PUB OFF –GUN” –ATF code for “Homicide, Willful Killing of a Public Official, Gun.”

According to records the rifle was purchased about three months into the treasonous and criminal operation known as Fast & Furious. Twenty-six year old Jacob A. Montelongo of Phoenix purchased the rifle on February 22, 2010. He would later plead guilty to to conspiracy, making false statements and smuggling goods from the United States and was sentenced to 41 months in prison.

According to court records, he had obtained 109 firearms, all while under the watchful eye of Holder’s oversight of the Bureau of Alcohol, Tobacco, Firearms and Explosives (BATFE or ATF).

Suspects in the shootout in Jalisco have also confessed to two other shootouts in the area, one of which left seven people dead. This is part of a continuing feud between rival Mexican drug cartels.

The death toll from Fast and Furious is enormous and is growing by the day and yet those responsible for it continue to be in power. Congress is moving very slow in their lawsuit in civil court to hold Eric Holder accountable for his blatant contempt of Congress and we are now going on nearly three years since the death of U.S. Border Patrol Agent Brian Terry. Terry’s family has filed a lawsuit against the ATF for wrongful death. Holder has shown that he has nothing but contempt for Congress voting to hold him in contempt.

Back in May Obama took the opportunity of a visit to Mexico City to tell college students “that much of the root cause of violence that’s been happening here in Mexico, from which so many Mexicans have suffered, is the demand for illegal drugs in the United States” and that “we also recognize that most of the guns used to commit violence here in Mexico come from the United States.” He failed to take responsibility for his administration’s involvement in arming Mexican drug cartels, which has helped to increase the violence there.

In September 2012 Barack Obama lied to the Mexican people when he told them that Fast and Furious began under George W. Bush, we demonstrated that was not the case.

It is high time these criminals be held accountable for their crimes. Contact your Representative or Senator and demand they move swiftly to bring justice to those involved.