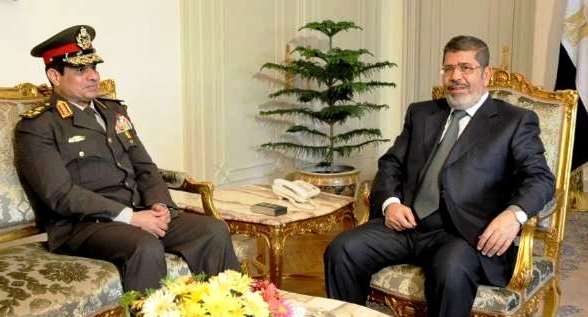 On July 5, El Watan (“the nation”), one of Egypt’s most popular newspapers, published the final dialogue between General Abdel Fattah al-Sisi and Dr. Muhammad Morsi, which took place on Tuesday July 2, a few hours before Morsi’s final speech to the Egyptian people. A reporter who was taken to an adjacent room was allowed to witness and transcribe their conversation from a TV screen. I translate the entire speech as it appears on El Watan below:

Exchange Between Morsi and Sisi

Morsi: What’s the military’s position concerning what’s going on? Is it just going to stand by watching? Shouldn’t it protect the legitimacy?

Sisi: What legitimacy? The entire army is with the will of the people, and the overwhelming majority of people, according to documented reports, don’t want you.

Morsi: My supporters are many and they won’t be silent.

Sisi: The army will not allow anyone to destroy the nation, no matter what happens.

Morsi: What if I don’t want to leave?

Sisi: The matter is settled and no longer up to you. Try to leave with your dignity and tell those whom you call supporters to go back to their homes in order to prevent bloodshed, instead of threatening the people through them.

Morsi: But this way it will be a military coup, and America won’t leave you alone.

Sisi: The people concern us, not America. And since you’ve started to talk this way, I’ll talk to you candidly. We have evidence to condemn you and to condemn many governmental officials of compromising Egypt’s national security. The judiciary will have its say and you will all be judged before the whole people.

Morsi: Okay, can you permit me to make a few phone calls and then afterwards I’ll decide on what to do?

Sisi: You are not permitted; but we can let you check up on your family only.

Morsi: Am I imprisoned or what?

Sisi: You are under arrest from this moment.

Morsi: Don’t think the Brotherhood is going to stand by if I leave office. They will set the world on fire.

Sisi: Just let them try something and you’ll see the reaction of the army. Whoever among them wants to live in peace, he’s more than welcome; otherwise, [if they try anything] we will not leave them alone. We will not single anyone out, and the Brotherhood is from the Egyptian people, so don’t try to use them as fuel for your disgusting war. If you truly love them, leave office and let them go to their homes.

Morsi: Anyway, I’m not going, and the people outside of Egypt are all with me, and my supporters are not going.

Morsi: Okay, but take care—I’m the one who hired you as minister and can remove you.

Sisi: I became minister of defense due to the military’s will and not yours—and you know this very well. Moreover, you can’t remove me; that’s it—you no longer have any legitimacy.

Morsi: Okay, if I agree to be removed, will you allow me to travel abroad and promise not to imprison me?

Sisi: I can’t offer you any promises. It’s the justice [department] that will pass its verdict.

Morsi: Okay, if that’s the case, I’ll make it war, and we’ll see who will prevail in the end.

Sisi: Naturally the people will win.

This article first appeared on RaymondIbrahim.com.