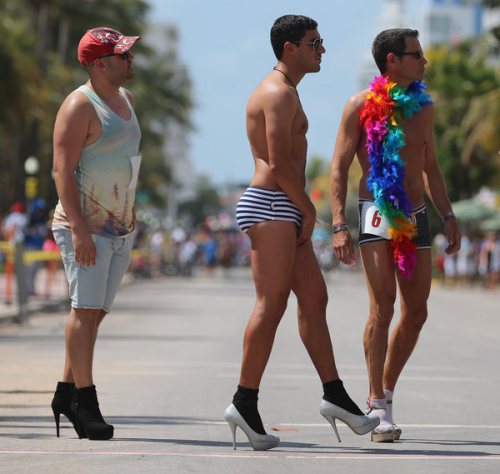 Behind last month’s 5-4 Supreme Court ruling against traditional marriage is an even more alarming phenomenon: The tidal-wave change in American public opinion on same-sex marriage. In a matter of a mere 3 years, public opinion as measured by Gallup shifted from 44% approval of gay marriage in 2010 to the current 53% approval — a leap of nearly 10%.

That cultural change is the work of Gay Inc. — a trio of powerful and well-financed homosexual activist groups:

HRC, with a total budget of more than $40 million, had thrown an enormous amount of resources behind the “fight for gay marriage.” Its “Millions for Marriage” campaign had, quite literally, raised millions.

But, revealing its priorities, Gay Inc. is indifferent to the alarming 22% increase of HIV infection among young sodomites. If HIV continues to spread at current rates, half of college-aged gay men will have the infection by the age of 50.

Elizabeth Flock reports for US News, July 3, 2013, that in December 2012, the Centers for Disease Control and Prevention (CDC) released startling new data showing a 22% increase in HIV infections in young gay men between 2008 and 2010, although new HIV infections had remained steady in the general public. Gay men represented two-thirds of new infections. Nor are HIV drugs keeping them alive: Nearly 6,000 gay men were dying of AIDS every year.

Jonathan Mermin, the director of the CDC’s division of HIV/AIDS prevention, pointedly notes that “Gay and bisexual men remain at the epicenter of the HIV/AIDS epidemic. But HIV is not always at the top of the list of priorities for LGBT organizations.”

The Kaiser Health Foundation recently described the problem of HIV in the city of Washington, where the HRC and many other big LGBT groups are headquartered, as “as epidemic on par with some developing nations.”

Michael Petrelis, a gay and AIDS activist, says, “‘Gay Inc.’ is interested in military, marriage, and money. But for the millions of gay people who don’t want to be soldiers, who don’t want to get married, where’s the advocacy?”

In a recent op-ed in The Washington Post, Peter Staley, a gay activist who founded the Treatment Action Group, a HIV/AIDS activist organization, writes, “The recent rise of HIV/AIDS … is huge and it’s not talked about because ‘Gay Inc.’ says nothing about it.”

Staley estimates that Gay Inc. currently spends less than 1% of its budget on “fighting “HIV. He is calling on Gay Inc. to, instead, allocate 10% of its budget.

Read the rest of the article, here.