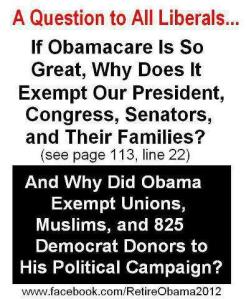 As Barack Obama has made it known, the Obamacare employer mandate will be pushed back a year. Just like he did in regards to immigration laws and DOMA (Defense of Marriage Act) he has picked and chosen what he will uphold and enforce as law. Now he’s doing it with his own healthcare law and it’s all political, make no mistake about it, but none of this is surprise to his administration. They’ve known they wouldn’t be able to fully implement the Obamacare Beast for months. Now people are losing their jobs because of it and more.

Four weeks ago, President Obama delivered a speech in San Jose, California touting the supposed benefits of his signature healthcare law.  For 85 percent of Americans, he claimed, the only change they’ll experience is superior coverage.  For virtually everyone else, there will be competitive exchanges in place starting next year, from which they’ll be able to select affordable coverage.  And if some people still aren’t able to pay those new, lower rates, the government would step in with subsidies to make up the difference.  Needless to say, his promises were deeply misleading at the time: Premiums were already heading north for millions of Americans, and many of those exchanges were already well behind schedule — to say nothing of layoffs, reduced hours, or targeted dumping.  What we now know that even as the president laid out this sunny vision in San Jose, he was already well aware that key pieces of his law would not be ready by the legally-required implementation date, throwing several wrenches into the seamless operation he was describing for public consumption. Here’s what he left out of his prepared remarks on June 7:

If you’ve been reading all the Obamacare stories lately, you might get the impression that the administration has just realized it will not be able to implement the massive health reform as designed. It has known for months. As far back as March, a top IT official at the Department of Health and Human Services said the department’s current ambition for the law’s new online insurance marketplaces was that they not be “a Third-World experience.” Several provisions had already been abandoned in an effort to simplify the administration’s task and maximize the chances that the new systems would be ready to go live in October, when customers are supposed to start signing up for insurance. In April, several consultants focusing on the new online marketplaces, known as exchanges, told National Journal that the idealized, seamless user experience initially envisioned under the Affordable Care Act was no longer possible, as the administration axed non-essential provisions that were too complex to implement in time. That focus has intensified lately, as officials announced that they would not be requiring employers to cover their workers next year or states to verify residents’ incomes before signing them up for insurance. “There’s been a focusing in not on: ‘What is the full ACA vision?’ but: ‘What are the pieces we have to get running by October 1?” said Cindy Gillespie, senior managing director at McKenna Long and Aldridge, who is working with states and health plans.

Guess what?  We’ve known for months, too, even as administration denied it until they were blue in the face.  ”Eighty-five percent” of Americans don’t believe everything will stay the same or improve under the new law, nor should they.  The law is crashing under its own weight, which may explain why a sizable majority of the public would prefer to turn back the clock on Obamacare.

It isn’t just these things though. The Associated Press is now reporting on another issue in the implementation of Obamacare:

In yet another health care overhaul delay, the administration has quietly notified insurers that a computer system problem will limit penalties that the law says the companies may charge smokers. A fix will take at least a year.

In a move that I actually think was brilliant by Speaker John Boehner (and you all know how difficult it was for me to say one of Boehner’s moves was brilliant), he asked why the Obama Administration won’t grant the same extension to small businesses, families and individuals that they are granting to large businesses. However, if we can delay the mandate for big businesses, why stop with delays, let’s just delay and then repeal the whole thing?

I’ll tell you why, they are targeting the heart of America. They are not about “equal protection under the law,” but about special rights, and unequal protection under the law. Remember when Valerie Jarrett was overheard saying, “After we win this election, it’s our turn. Payback time. Everyone not with us is against us and they better be ready because we don’t forget. The ones who helped us will be rewarded, the ones who opposed us will get what they deserve. There is going to be hell to pay. Congress won’t be a problem for us this time. No election to worry about after this is over and we have two judges ready to go.” Well, friends there’s definitely hell to pay when this administration remains in power.