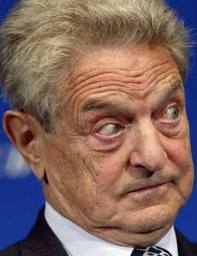 What do Kofi Annan, General Wesley Clark and the new Vice President of Foreign Affairs in Egypt have in common? They have all sat on the Board of Trustees of the International Crisis Center, funded by George Soros’ Open Society Group. Don’t be fooled by the recent uprisings in Egypt. They appear to be just another false flag operation to finally get the men in power that they wanted all along. Mohammed ElBaradei is one of those men. On July 9, 2013, ElBaradei became Egypt’s second in command. He was appointed Vice President of Foreign affairs to rule alongside HazemBeblawi, for now, anyway!

Beblawi is a leading liberal economist who was appointed as interim President but The Los Angeles Times reported that, “ElBaradei’s name was removed from consideration for the prime minister post after the ultraconservative SalafistNour Party, a key part of the coalition that forced Morsi’s removal, said it would withdraw from the transition process if he were confirmed. There is more to this story than meets the eyeand ElBaradei is the one that we should keep our eyes on for now. There are forces behind him who could possibly “nudge” him into the top spot. Don’t forget that ElBeblawi is the interim Prime Minister.

Always watch what the other hand is doing! As recently as 2010, ElBaradei sat of the board of Directorsat the International Crisis Center. The MidEast Newswire said the following regarding the International Crisis Center in February of 2011: “This organization is heavily funded by George Soros, a man experienced in funding revolutions and placing leaders he wants and believes will push for globalization in that country.”

Mohammed ElBaradei is George Soros’ man. He was born in Cairo in 1942 to a middle class family. He earned his Bachelor’s Degree from the University of Cairo, an advanced degree in Switzerland and went on to earn his doctorate in international law from New York University in 1974. ElBaradei was awarded the Nobel Peace Prize in October of 2005, jointly, with the International Atomic Energy Agency. ElBaradei was the head of the IAEA for 12 years, from 1997 to 2009.

ElBaradei was instrumental in the ousting of Hosni Mubarak, the Egyptian Prime Minister who ruled Egypt for 28 years. According to CNN, “In March 2011, ElBaradei announced he was running for president, and 10 days later, thugs attacked his car, keeping him from voting in a constitutional referendum.”

The Arab Spring uprising of 2011 and the Egyptian uprising of 2013 appear to be a tangled web of both truth and conspiracy theories (that may prove to be true), which are just now beginning to unwind. The most important question that we can ask now is: where do ElBaradei’s loyalties lie? We know that he is in the pocket of Soros, but it may shock you to know that he has a history of being sympathetic to Iran and its ability to attain nuclear weapons.

In the following YouTube video from InfoLive, uploaded in June of 2008, ElBaradei demonstrated that he was soft on Iran’s attempt to get a nuclear weapon.

When asked about Iran’s transparency in creating nuclear weapons, ElBaradei didn’t act like it was an urgent matter. He said “But at the end of the day, I would rather wait to see this transparency.” In the interview, he made his position clear to the U.S. regarding military intervention in Iran. He stated, “This is a threat directed at the Americans – If you strike, I will resign.”

It is no secret in international circles that, as head of the IAEA, ElBaradei turned a blind eye to Iran’s desire to become a nuclear nation. In February of 2011, Joel C. Rosenberg stated the following on his blog:

The Iranians dramatically accelerated their nuclear enrichment program in violation of U.N. resolutions and international law during those 12 years (that ElBaradei headed the IAEA). But ElBaradei never seemed bothered. Iran built three secret nuclear facilities during this time, yet ElBaradei never seemed to notice (until other intelligence agencies called his attention to them).

Not only does ElBaradei have a reputation of being sympathetic toward Iran, he has never been considered to be a friend of Israel. During ElBaradei’s tenure at the IAEA, Iran’s Prime Minister, Mahmoud Ahmadinejad made repeated hateful remarks against Israel and the U.S., which included “wiping Israel off the face of the map.” Yet, in October of 2009, ElBaradei sided with Iran and chastised Israel when he said, “Israel is the number one threat to the Middle East given the number of nuclear arms it possesses.”

In September of 2005 at the U.N. Security Council, ElBaradei stated, ““I am encouraged that the issue (of Iran building nuclear facilities) has not been referred to the Security Council, precisely to give time for diplomacy and negotiation.” Anne Bayefsky of the PJ Tattler cited the following:

The Egyptian Newspaper Al Youm Al Sabeh reports: In a communication to the Attorney General of Egypt, Dr. Yasser Najib Abdel Mabboud, has accused Dr. Mohamed ElBaradei, former Director General of International Atomic Energy Agency and a candidate in the Egyptian presidential elections, of receiving funds exceeding $7 million (US) from Iran’s leadership as support for ‘political reform in Egypt.’

This is an interesting turn of events that warrants further investigation. When I went to the link, which was listed on the website above, however, the remark had been removed.

While the Egyptian uprising (coup) appears to be a democratic movement, we must not jump to conclusions for better or worse, but pray for the citizens of Egypt. Dare we naively assume that this revolution will turn out better for the Egyptian citizens than the last one? Already, there have been reports of up to one hundred women being gang raped in the streets and Morsi sympathizers throwingpeople off of buildings.

Further, where Soros is, Obama is usually lurking in the shadows. It seems no coincidence that Obama has snubbed Netanyahu time and time again and turned a blind eye to Iran’s nuclear ambitions. More of Obama’s involvement in this matter will be revealed in the coming days.

The mainstream media will do its best to spin ElBaradei as a leader for human rights, but he is simply a front man for Iran, Soros and United Nations. So, watch closely in the next few weeks and months. Keep your eye on ElBaradei. This sinister web is unraveling and more will be revealed. Please stay tuned and informed. There is more to this story…much, much more.

This article first appeared on Lady Patriots. Laurie Sterling is a staff writer for Lady Patriots and a guest contributor of The D.C. Clothesline.