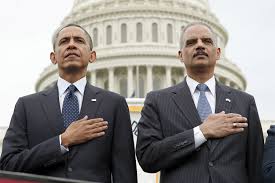 Two days ago, I did a post on the nonpartisan watchdog group, Judicial Watch, having obtained Department of Justice (DOJ) documents on a secret organization within the DOJ called Community Relations Service (CRS) that was sent to Florida after the shooting death of black teen Trayvon Martin.

Martin was shot on February 26, 2012 after wandering, after dark, in a gated community in Sanford, FL.  George Zimmerman, a resident of the community and its neighborhood watch captain, is currently on trial for Martin’s death though he maintains he acted in self-defense.

Although the CRS grandiosely calls itself “America’s Peacemaking Agency,” its actual mission is to help initiate and organize — that is, foment — the racial protests and demonstrations in the aftermath of the shooting.

As Judicial Watch puts it: “Though CRS purports to spot and quell racial tensions nationwide before they arise, the documents obtained by Judicial Watch show the group actively worked to foment unrest, spending thousands of taxpayer dollars on travel and hotel rooms to train protestors throughout Florida.”

As reported by Breitbart.com, the hour+ long audio is from a meeting at the Shiloh Church on April 19, 2012. In that meeting, Thomas Battles — a CRS regional director tasked with “working” the Trayvon Martin rallies in March and April 2012 –  “coordinated” with community members to oust Police Chief Bill Lee.

Battles says on the tape: “I want to welcome you all tonight to a community dialogue. Tonight comes out of a commitment by the city to begin to develop a plan to talk with the community about moving forward. So as we come tonight, this is not a gripefest, but an attempt to move the city forward in a very positive way… CRS is an arm of the department that we call the Peacemakers. We work with communities where there is real or perceived racial tensions. If a community perceives that there’s something wrong in the black community, there’s something wrong.”

Battles then introduces someone from the Dream Defenders, who says, “When Trayvon happened, for many of us, it was the proverbial straw that broke the camel’s back. We had grown up in a state and environment where race is a way of life…. We’re not from Sanford, but what Sanford represented to us was the very real problems going around this state and this country. We wanted to figure out how could we stand in solidarity, and how could we make this about not just justice for Trayvon, but using this moment and using the opportunity to honor his memory, to honor his spirit by working to bring down the various structures and the various systems that allow something like this to happen.”

You can listen to the audio for yourself by going to Judicial Watch, or here.

So when Florida ignites in a conflagration of racial riots if the jury acquits Zimmerman, you’ll know whose hand is behind the “unrest.”