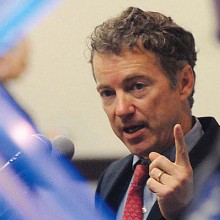 As the US plans to send Egypt four more F-16 fighter jets to Egypt, despite their military having ousted Muslim Brotherhood member and former President of Egypt Mohamed Morsi, Senator Rand Paul (R-KY) introduced legislation to prohibit the United States from sending foreign assistance to the government of Egypt.

“Egypt is the latest example of the Obama Administration’s misguided foreign policy,” Sen. Paul said. “The overthrow of the Egyptian government was a coup d’état, and the law is clear that when a coup takes place, foreign aid must stop. But, the President still plans to continue to send aid to Egypt, at a pace of more than $1.3 billion per year. By the President’s refusal to call the situation in Egypt a ‘coup’ and continuing the flow of foreign assistance to Egypt, he is forthrightly saying ‘I am ignoring the rule of law.’”

Earlier this year, the Senate voted against an amendment introduced by Sen. Paul that would have prohibited the U.S. government from selling F-16 military aircraft, M1 tanks, and similar military weapons to the Egyptian government.

According to the legislation titled “Egyptian Military Coup Act of 2013,” introduced by Senator Paul point out that “On July 3, 2013, the military of Egypt removed the democratically elected President of Egypt, arrested his supporters, and suspended the Constitution of Egypt. These actions fit the definition of a military coup d’etat.”

The legislation goes on to point out:

Pursuant to section 7008 of the Department of State, Foreign Operations, and Related Programs Act, 2012 (division I of Public Law 112–74; 125 Stat. 1195), the United States is legally prohibited from providing foreign assistance to any country whose duly elected head of government is deposed by a military coup d’etat, or removed in such a way that the military plays a decisive role.

Paul’s legislation points out that the US has suspended aid to other countries in the past who have undergone military coups d’etats, including the Ivory Coast, the Central African Republic, Thailand, Mali, Fiji, and Honduras.

Senator Paul’s legislation also says that in addition to the restrictions of section 7008 of the Department of State, Foreign Operations, and Related Programs Act, 2012 there are other additional restrictions that should be carried out. He lists the following:

Rand Paul, like his father, has called for a halt of aid to foreign countries, especially Muslim countries. He has stood up to the Democrats over the issue of foreign aid and been attacked by liberal RINOs for doing so. He has slammed Senator John McCain for posing for pictures with terrorists that Barack Obama and State Secretary John Kerry want to send foreign aid to in Syria. In fact, Paul was one of four senators who introduced a bill to block military funds to Syria.

I’m hopeful that he will get the backing of many members in the Senate, but I’m not holding my breath. However, I don’t think we should hold our collective breaths on this one. Contact your senator and tell them to get behind this effort. After all, it’s your money we’re talking about.