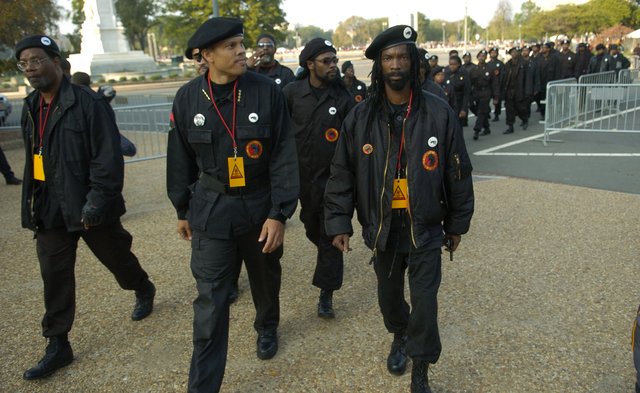 There is a story behind the story in the Zimmerman case. We have all heard about the numerous tweets and posts that are promising vengeance if Zimmerman is acquitted, but you must look beyond that. The promised racial riots are simply a cover for something bigger in my opinion. The call for blacks to riot is simply a smoke screen for a hidden agenda. My best suggestion is to be prepared to defend your family because there are some who want these “riots” to extend outside the State of Florida and we must look at the source. Whenever the New Black Panther Party becomes involved I think it’s fair to look at the possible motivation.

The organization jumped on the Trayvon Martin death early with a bold statement. The Southern Poverty Law Center reports:

The group made headlines across the country in March 2012 when Mikhail Muhammad, a New Black Panther leader in  Florida, said the NBPP was placing a $10,000 “bounty” on a neighborhood watch volunteer who killed 17-year-old Trayvon Martin, an African American, in Sanford, Fla. When asked whether he was inciting violence, Muhammad said, “An eye for an eye, a tooth for a tooth.” The group also called for the mobilization of 10,000 black men to capture the Hispanic man who shot the unarmed teen as he was walking through a gated community wearing a hooded sweatshirt and carrying only some candy and iced tea. The lack of charges against the gunman, who claimed he was attacked by Martin, sparked nationwide outrage.

The obvious question on everyone’s mind is how a group can get by with putting a bounty on a man’s head with no consequences? Well, the conspiracy runs very deep. Let us not forget that Eric Holder was involved in an armed takeover of an abandoned ROTC building as a freshman at Columbia. This was not necessarily a Black Panther operation but it was run by the Black Students’ Organization at Columbia. You might say that Holder was a Black Panther wannabe back in the day.

Further evidence of that was his weak treatment of the Philadephia Voter Intimidation scandal that involved The New Black Panthers. According to wikipedia:

The New Black Panther Party voter intimidation case, sometimes known simply as the Black Panther Case, is a political controversy in the United States concerning an incident that occurred during the 2008 election. The New Black Panther Party and two of its members, Minister King Samir Shabazz and Jerry Jackson, were charged with voter intimidation for their conduct outside a polling station in Philadelphia. The Department of Justice later narrowed the charges against Minister King Shabazz and dismissed the charges against the New Black Panther Party and Jerry Jackson. The decision to dismiss the charges has led to accusations that the Department of Justice under the Obama administration is biased against white victims and unwilling to prosecute minorities for civil rights violations. These charges have been most notably made by  J. Christian Adams, who in May 2010 resigned his post in the Department of Justice in protest over the Obama Administration’s perceived mishandling of the case, and by his former supervisor Christopher Coates.

When you combine the recent discovery that Holder’s Department of Justice has actually been instigating the anti-Zimmerman protests and consider that we have a President who is either a Muslim, or at the very least a Muslim sympathizer, you have a combination for the perfect storm.

Am I overreacting? Has the summer heat gone to my head?

Maybe so but the important thing is to be ready in case I am right.

I see this whole race riot build-up at a simple smoke screen for what is likely going on behind the scenes. Any people that want to riot on the basis of race will certainly be viewed as “useful idiots” that are serving in the name of Jihad. That is my opinion. I expect extremist Muslims to take a different perspective on the situation.

They don’t give a damn about Martin or Zimmerman. This is simply an excuse for them to kill in the name of Allah and make it look like it was done in the name of Trayvon Martin. Members of Hezbollah routinely come into this country through the Arizona border. If the New Black Panthers ask, Hezbollah will act for this cause. The Panthers are very much an extension of Hezbollah in America.

My suggestion is to be locked and loaded and prepared for the absolute worst. Whether someone comes to kill me because I am white or because I am an infidel does not matter to me. If they come for my family they had better be ready to meet both my guns and my God, in that order.

I truly believe that they are trying to set up a holy war without openly calling it that. Be ready Florida. The rest of us need to be prepared as well just in case the promises of the Black Panthers come true:

For the record I want justice in this case. Both sides have been putting their own spins on the case to further their agenda. Both the liberal and conservative media are reporting what is convenient and omitting what is not convenient. I tend to lean toward the side of innocence, based on the facts available to me, but the case itself is not my biggest concern. It is what the verdict might trigger.

Be ready and let’s all pray that I am wrong.