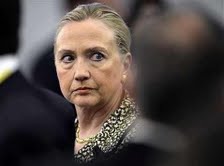 Here’s another Obama regime scandal that you’re not hearing or reading about in the State Controlled Media.

The Western Center for Journalism reports that under the watch of then-Secretary of State Hillary Clinton, the U.S. State Department was rife with corruption and sex crimes:

Most serious of all is U.S. Ambassador to Belgium Howard Gutman.

Interestingly, the married Gutman’s residence in Brussels is on a street that is the northern border of the Parc Royal/ Warandepark, where some of the alleged solicitations and ditching of security took place. According to Atlantic Wire, the park is rumored to be a site of frequent homosexual and underage prostitution involving young boys.

Even when it became known that he was engaged in pedophilia, Gutman was allowed to continue his sexual perversity for months. Why?

Because Gutman has special connections to the POS in the White House.

Like Obama, 57-year-old Howard Gutman is a graduate of Columbia University and Harvard Law School. More importantly, Gutman was a money man for Obama, having raised (“bundled”) $500,000 (half a million!) for the latter’s 2008 presidential campaign and another $275,000 for his inauguration..

As reported by S.A. Miller and Geoff Earle of the New York Post, instead of throwing Gutman in jail as a sexual predator, Hillary’s deputy, Under Secretary of State Patrick Kennedy, ordered the IG investigation ceased, and the ambassador remains in place until he departs from the ambassadorship on July 23, 2013.

All this was contained in the IG report, which outlined eight cases of problems within the State Department’s Bureau of Diplomatic Security (DS) that provides protection and investigates crimes involving any State Department workers overseas. But the cases were removed from the IG report by the department’s senior officials, including one instance of interference by Hillary Clinton’s chief of staff, Cheryl Mills.

IG senior investigator Aurelia Fedenisn turned whistleblower and revealed the massive coverup. For that, she was subjected to a campaign of intimidation.

As reported by John Hudson for Foreign Policy, FBI agents camped in front of her house, bullied her children, and demanded that she sign documents—in effect a confession—that she had stolen confidential State Department documents. Fedenisn refused and has paid the price, becoming one of the many hounded and intimidated whistleblowers pursued by the Obama regime.

Pres. Lucifer’s henchmen even went after Fedenisn’s attorneys — the law firm Schulman & Mathias. As in Nixon’s Watergate break-in, the law office of Schulman and Mathias was broken into multiple times in a single day. Even though there was money, even silver bars in the office, the only thing that the “burglars” took were computers — computers containing the files of Fedenisn’s case on Hillary Clinton’s coverup of the criminal behaviors of her State Department underlings, including pedophile Gutman.

This is the same Hillary Clinton who, just days after she stepped down from being Secretary of State, launched a new website HillaryClintonOffice.com on January 31, 2013. To match the new website, she also got a new face and new hairstyle — all moves to position herself to run for the presidency in 2016. (See my post of June 4, 2013, “3 signs Hillary Clinton will run for president in 2016.”)