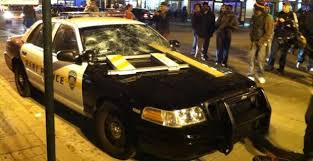 One police car was daubed with the words “Kill Pigz” as American flags were torched. “Kill Zimmerman” was also scrawled on the Alameda County Court.

Following a wave of threats to riot in major cities if Zimmerman was cleared of all charges, trouble flared up almost immediately after the verdict was announced late last night.

Unrest appears to be confined to Oakland for the time being, with more peaceful protests taking place in San Francisco, Washington, DC, New York and Chicago.

A hoax is also circulating concerning a video of riots in Vancouver from 2011 which was falsely labeled as having taken place in Miami.

Hopefully some of the unrest seen in Oakland last night will remain limited and the wave of rioting threatened by many will not materialize.

Read the Full Story at Prisonplanet.com…