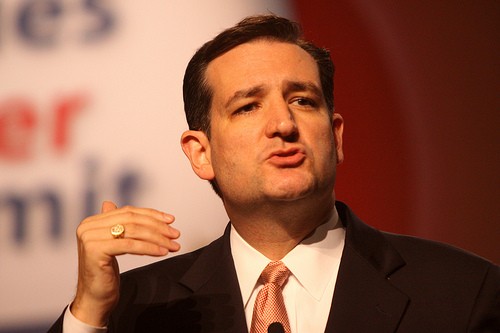 On Thursday, Senator Ted Cruz (R-TX) introduced legislation in the Senate that would completely defund the Affordable Care Act, aka Obamacare. He wasn’t alone in proposing the legislation either. The bill has 19 co-sponsors, all Republicans, including RINOs.

Amazingly simple, the Defund Obamacare Act of 2013 is only 2 pages.

There are three main elements to the bill. “In general,” the bill reads “Notwithstanding any other provision of law, no Federal funds shall be made available to carry out any provisions of the Patient Protection and Affordable Care Act (Public Law 111-148) or title I and sub-title B of title II of the Health Care and Education Reconciliation Act of 2010 (Public Law 111-152), or of the amendment made by either such Act.”

Second, the bill speaks to limitation. “No entitlement to benefits under any provision of the Patient Protection and Affordable Care Act (Public Law 111-148) or title I and subtitle B of title II of the Health Care and Education Reconciliation Act of 2010 (Public Law 111–152), or the amendments made by either such Act, shall remain in effect on and after the date of the enactment of this Act, nor shall any payment be awarded, owed, or made to any State, District, or territory under any such provision.”

Cruz said in a statement that the introduction of the legislation is consistent with his long-standing position that no continuing resolution or other appropriations measure should fund Obamacare.

“The Administration’s recent announcement to delay the onerous and unpopular employer mandate until after the 2014 election, coupled with its announcement to delay income and health status eligibility requirements in favor of an honor system for the most expensive entitlement for our generation, confirms what has been obvious from the start—this law is a colossal mistake,” said Cruz.

All 45 Republican Senators called for a permanent delay of Obamacare earlier this week in a letter to Barack Obama.

Cruz added, “The Administration’s selective enforcement of Obamacare’s implementation is no indication that the law is going away. To the contrary, it demonstrates the President’s unyielding determination to force the unworkable law on the American people.”

“Delaying only one aspect of this tangled mess leaves Americans holding the tab for an irreparably broken law they do not support,” said Cruz. “Moreover, it leaves in motion many of the most egregious parts of the law, ensuring they will take root in just a few short months. This is untenable.”

The Texas senator agreed with the lead Senate Democrat author of Obamacare Max Baucus that Obamacare is a “huge train wreck.”

“President Obama wants to delay the employer mandate – giving large businesses a temporary reprieve from part of Obamacare’s job-killing impact – but he is unwilling to give hardworking American families the same consideration,” Cruz continued. “But everyone, not just large corporations, deserves to be spared being forced to participate in the Obamacare ‘train wreck.’”

Senator Cruz then put in perspective just how the IRS can no longer be trusted not only in the job they have been assigned with, but also the implementation of Obamacare. “Moreover, in light of the admitted misconduct of the IRS – targeting those whose political views differed from the President’s – we cannot trust the IRS to implement Obamacare. The American people cannot trust the IRS to create and enforce the largest federal database in history, containing the intimate details of our personal healthcare matters. And we cannot just wait for this law to implode under its own weight. The clock is ticking, and the time to act is now – Obamacare full implementation is set for January 1, 2014, but the enrollment for new entitlements starts on October 1, 2013.”

Cruz calls for vigilance in pointing out the economic harm that has and will come from implementing Obamacare. “We must guarantee that American taxpayers do not spend one more dime to implement Obamacare.”