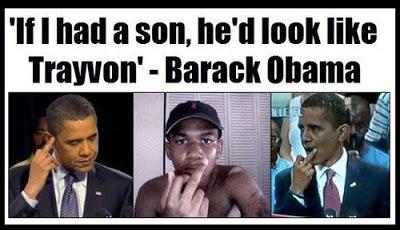 Barack Obama once again used the Trayvon Martin incident to push an agenda, his gun control agenda. On Sunday afternoon, Obama asked that Americans temper “passions” and reminded them that “we are a nation of laws and the jury has spoken,” even while his own administration has ignored many of our nations laws and even violated them.

He then used the death of delinquent Trayvon Martin saying that his death should be honored by Americans committing to “stem the tide of gun violence.”

Obama said that we should “ask ourselves if we are doing all we can to widen the circle of compassion in our communities.”

Perhaps Mr. Obama should ask himself that. After all, it is because of his own statements that the George Zimmerman/ Trayvon Martin incident was even brought to the national stage. It’s also because of his own Justice Department that Zimmerman was even charged and that protests ensued.

Remember, it was Barack Hussein Obama, the bastard son of one Stanley Ann Dunham, that spoke to America saying that “If I had a son, he’d look like Trayvon.” As Americans, we would say, “If we had a race baiting president, he would look like Barack Obama.”

While Obama did touch on a bit of truth in calling the death of Martin “a tragedy,” he failed to point out that it was no one’s fault but his own.

We know Martin had a history of drug use, including having drugs in his system at the time of death, as well as being involved in theft. Yes, Mr. Obama, if he was only a Muslim and hung out with Marxists, Communists and Socialists, he would be the spitting image of you.

However, it’s this part that is unforgivable coming from the man who sits in the Oval Office. “And in the wake of the verdict, I know those passions may be running even higher.” Why? Why are passions running so high? They weren’t in the weeks as George Zimmerman was free, uncharged by police who had thoroughly investigated what took place. It was not until Obama’s administration became involved that passions began to rise. He alone is to blame for the passions of anyone running high, not a jury’s verdict.

But beyond that, to ask me and you, Mr. and Mrs. American citizen, what we can do to “honor Trayvon Martin” by “stemming the tide of gun violence” is a slap in the face. What he’s really saying is for Americans to submit to more gun control measures and more infringement of their ability to keep and bear the arms they need. In other words honor a thug by calling for more gun control.

I’ll tell you straight up that the world is a better place without Trayvon Martin. Knowing his history and what he was all about, we are better off. Martin should not be honored but remembered as a person whose life should be shunned, not honored.

Perhaps we should not be asking about stemming the tide of gun violence as we should be asking Americans if they are properly armed and trained to use their arms in case they run across a threat like a Trayvon Martin. That would be a way to honor the American spirit, not a drug using, thug and thief.

UPDATE: Now the Obama Justice Department is being pressured to file federal charges against George Zimmerman. Upon what basis does the federal government have anything to say in this matter? None that I can see. The Hill reports:

Attorney General Eric Holder faces a crucial decision on whether to press federal civil rights charges against George Zimmerman, after the neighborhood watchman was acquitted Saturday in the shooting death of unarmed black teenager Trayvon Martin.

The NAACP and other leading civil rights groups are pressing for Holder to open a federal case against Zimmerman, after he was found not guilty on second-degree murder and manslaughter charges by a Florida jury.

The public pressure leaves Holder, the nation’s first African-American attorney general, facing a difficult decision on a controversial case that has grabbed the nation’s attention and sparked renewed debate about racial profiling.

In a statement from NAACP President Ben Jealous, the civil rights group said they were “not done demanding justice for Trayvon Martin.”

Oh I get it now. This is the same BS that started this in the first place….public pressure by racists, like the NAACP’s Ben Jealous. I guess Obama needs to remind his Attorney General that the jury has spoken. Zimmerman is not guilty!