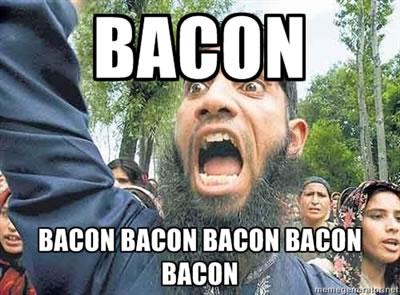 I am not very fond of certain things… Liver and onions makes me somewhat nauseous. Even the smell or sight of it makes me sick. I can hardly stand to see someone eat froglegs either. I’m sure they might be delicious but I have always had a problem with the killing of Kermit simply to eat his legs. I suppose I would eat it if I were hungry and if you read the end of this article I will give you a surprise confession about what people will do when they are hungry. But, back to the topic at hand… Dailymail.co.uk reports:

Islamic extremists threaten to stab fellow inmates who eat pork in front of them at one of Britain’s toughest jails, a prisoner has claimed.

The ‘long serving prisoner’ at HMP Long Lartin said cooking pork at the communal kitchen is ‘deemed dangerous, even a threat to your life’.

The anonymous man made the claims in a letter to prisoners’ magazine Inside Time.

He claims inmates at the jail are being radicalised but the issue is not being addressed by prison bosses.

‘Terror’ preacher Abu Hamza and radical cleric Abu Qatada have both been held at the prison.

The inmate wrote: ‘The kitchen is usually occupied by 90 per cent Muslims and we have been told if we cook pork we will be stabbed. There have been incidents here where people have been targeted and pressured and bullied into converting to Islam.

‘Young Muslim men are being radicalised in here and one day they may commit acts of terrorism in this country.

‘There seems to be nothing being done here to stop it and people are scared to speak out.’

If you would like, you can read the entire article here. It seems that the Brits have a lot of the same problems that we do in the states. Muslims think they run this country.

Oh, wait a minute… bad example. Muslims do run this country. My apologies to Hussein Obama.

Here is the deal. These are prisoners and I think we should make their dumb asses eat pork just on sheer principle. When a prisoner commits a crime they cease to have traditional rights and freedoms. That is a fact in most prisons. Gitmo might be an exception. But, of course, Guantanamo is a special type of prison. It’s not really a prison at all. It’s just a country club where Obama keeps his reserves and reinforcements until he needs them.

OK I promised you a confession. I want you to understand that I don’t feel good about this but I did it. Back in my college days I had a friend named Emad. He was an exchange student from Kuwait. Over the summer we stayed in the same suite (with 4 adjoining bedrooms). He was a friend of mine.

We were stoner buddies. Back in the day I inhaled on a frequent basis and sometimes that meant that beer and marijuana came before food. This was true for myself and a lot of losers that I hung out with. The good news is that we all turned out fine. God is good and miracles happen. 🙂

At any rate, it had been days since Emad or I had eaten and I somehow came upon some money. I would suspect my Mom sent it to me. I was such a mooch back then.

So I decided to buy some food. But this is where my slightly evil side kicked in. What did I get? Pizza of course. That was a given. But oh no, I couldn’t get beef or veggie or anything of the sort. I had to get supreme that was dripping in the goodness of pork.

I felt like I had to do it. Only two things could happen. Either I would have the whole pizza to myself (good thing) or Emad would break down and eat pork (humorous thing).

To make the story short… He ate it and loved it. He was hungry and of course he was going to eat it. The funny thing is that I really don’t like Italian sausage much. To this day if I have my choice I usually leave it off. But not on that day.

I feel like in the case of my friend I did him wrong but… I was a kid and thought it was funny at the time. Either way I have never been out to trash anyone’s religious beliefs. Back in the late 80’s I didn’t see a Muslim friend as a danger. I saw him as a guy who would eat pork when he was hungry and give me a reason to laugh at him.

So what’s the point?

I wish someone would show some balls and tell these mouthy bastards to shut up and eat their bacon. These are prisoners. This became a story because they want to kill other prisoners in the name of pork. I say that we should make them eat it or starve to death.