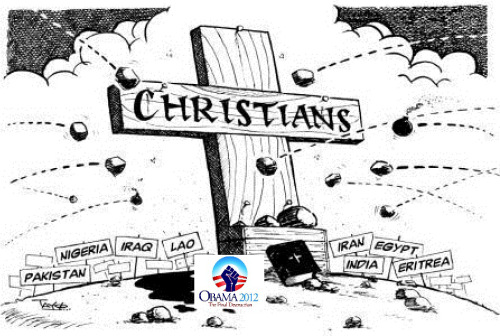 Do you remember our Trail Dust’s post of April 28, 2013, “Christianity to be outlawed in U.S. military,” on the Pentagon consulting the virulently anti-Christian atheist Mickey Weinstein to develop new policies on “religious tolerance,” including a policy for court-martialing military chaplains who share the Christian Gospel during spiritual counseling of American troops?

3 days later, on May 1, 2013, I posted a follow-up, “Pentagon may court martial soldiers for sharing their Christian faith,” about a statement from the Pentagon confirming that not only will military chaplains be court martialed, any soldier who engages in “religious proselytization” (i.e., who shares the Christian faith with another) will also be subjected to court martial and “non-judicial punishments.”

A day after, on May 2, 2013, Bob Unruh of WND reported that the Pentagon was backing off. Lt. Cmdr. Nathan Christensen issued a statement saying that the Department of Defense “never and will never single out a particular religious group for persecution or prosecution.”

Christians in the U.S. military are being persecuted and prosecuted.Below are two examples of Christian servicemen being coerced to either embrace the “gay lifestyle” or get out.

1. The case of Technical Sgt. Layne Wilson, a 27-year veteran of the Utah Air National Guard.

Wilson wrote: “This is wrong on so many levels. If they wanted to get married in a hotel that is one thing. Our base chapels are a place of worship and this is a mockery to God and our military core values. I have proudly served 27 years and this is a slap in the face to us who have put our lives on the line for this country. I hope sir that you will take appropriate action so this does not happen again.”

Instead of responding to the private email, the Commandant of Cadets notified the Utah Air National Guard. All of which led to Wilson being reprimanded for conduct inconsistent with the United States Air Force, which had brought disgrace and discredit upon the Air National Guard.

In a letter to Wilson, Lt. Col. Kevin Tobias of the Air National Guard reprimanded Wilson for failing “to render the proper respect to a commissioned officer” and that “As a noncommissioned officer you are expected to maintain a standard of professional and personal behavior that is above reproach. You have failed!”

Col. Ronald Blunck concurred with Tobias – noting that TSgt. Wilson’s “right to practice your religious beliefs does not excuse you from complying with directives, instructions and lawful orders.”

After formally reprimanding Wilson, the Air National Guard then terminated its six-year reenlistment contract with Wilson, in effect telling him to retire. “Due to the fact that I expressed my views on homosexuality in uniform; Lt. Col. Tobias stated that I was no longer compatible with further military service,” Wilson wrote in a letter detailing the discrimination allegations.

What is even more outrageous is that at the time of Wilson being reprimanded, the Supreme Court had not yet ruled on the Defense of Marriage Act (DOMA), which means DOMA was still the law of the land. In other words, in objecting to the homosexual wedding in the West Point chapel, TSgt. Wilson was merely expressing his disapproval of an act that was in violation of a federal law!

Wilson maintains that the military has created an atmosphere where those who do not approve of homosexual conduct “must remain disapprovingly silent or face reprisal to our careers. It is evident those who refuse to affirm homosexuality and openly oppose it are being severely punished.”

TSgt. Wilson has retained the counsel ofattorney John B. Wells, a retired Navy commander, who is asking the military to rescind the reprimand and reinstate the original six-year reenlistment contract with Wilson.

“This was an executed contract,” Wells said. “But they just went in, tore it up and issued a new one.” Wells said his client’s only “crime” was registering his opinion that a gay marriage in a military chapel was a violation of the law that existed at that time. “His actions were proper within the scope of the Uniform Code and the Manual for Courts-Martial. While his interpretation of the law may or may not have been correct, his actions should not have given rise to the firestorm of reprisals that he has suffered.”

Wells believes that incidents like TSgt. Wilson’s are just the “tip of the iceberg” and that “The military is trying to make examples of people who have religious beliefs that homosexual conduct in the military is wrong. When these people assert their First Amendment rights, they are getting slapped down and slapped down hard. The end game is to force conservative Christians out of the military.”

Todd Starnes reports for Fox News Radio, June 24, 2013, that Master Sgt. Sommers is a 25-year military veteran, a decorated soloist with the U.S. Army Band, and a Christian conservative.

On June 9, 2013, one day after Sommers told Fox News he was facing discrimination and persecution because of his conservative political and religious beliefs, the master sergeant was found guilty of three Article 15 charges:

But according to attorney John Wells, the Army’s charges against Sommers stemmed from his giving a superior officer the wrong date for a doctor’s appointment. As for the charge of Sommers disobeying an order, Wells explains that in order to comply with that order, Sommers would have had to disclose private information about his autistic son’s medical records. “The timing does seem strange,” Wells told Fox News. “It’s suspicious. It looks like a graduated attempt to build a case against him on some really ridiculous charges..”

Although Sommers received an oral reprimand and will not be reduced in rank, Wells says he plans on appealing the non-judicial punishment and is consideringa lawsuit under the Administrative Procedures Act and the Religious Freedom Restoration Act: “MSgt. Sommers wants to thank the tens of thousands of Americans that have followed his case and offered up prayers for his case. He has decided to put his fate in God’s hands and continues to pray for those who are persecuting him.”

Retired Lt. Gen. Jerry Boykin believes the Army is trying to send a message to not only Sommers but others in his unit: “Over my 36 years in the US Army I saw numerous situations like this where a soldier is singled out by the chain of command for punishment. The Article 15 proceeding may be technically legitimate, but one must recognize that an Army Master Sergeant with 25 years does not normally do stupid things that are easily avoidable unless there is some mitigating circumstance.”

MSgt. Sommers believes the real reasons why he was reprimanded are his conservative political beliefs and Christian faith.

His troubles began last year when he was confronted about having pro-Republican and anti-Obama bumper stickers on his personal vehicle. The stickers read: “Political Dissent is NOT Racism,” “NOBAMA,” “NOPE2012,” and “The Road to Bankruptcy is Paved with Ass-Fault.” That last bumper sticker included the image of a donkey. Sommers was told by his superior officer that the bumper stickers were creating “unnecessary workplace tension.”

Sommers also came under fire for reading the works of conservative Mark Levin, Sean Hannity and David Limbaugh. Last summer he was quietly reading Limbaugh’s The Great Destroyer backstage at a concert when a superior officer told him that he was causing “unit disruption” and was offending other soldiers. “I wasn’t reading aloud,” Sommers told Fox News. “I was just reading privately to myself. I was told they were frowning on that and they warned me that I should not be reading literature like that backstage because it was offensive.”

But the incident that led to an official investigation of Sommers came late last summer when he served Chick-fil-A sandwiches, paid for with his own money, at his promotion party.

“My family likes Chick-fil-A and we like what they stand for,” he said. “I can make a statement and at least express a religious point of view at my promotion party – theoretically without any fear of reprisal.” The soldier also tweeted about the party: “In honor of DADT repeal, and Obama/Holder’s refusal to enforce DOMA act, I’m serving Chick-fil-A at my MSG promo reception for Army today.”

The tweet came under fire from his superior officers, according to an official military document that states: “As a Soldier you must be cognizant of the fact that your statements can be perceived by the general public and other service members to be of a nature bordering on disrespect to the President of the United States.”

Attorney Wells believes Sommers is being discriminated against not only because of his Christian faith, but also because of his objections to homosexuality: “There’s no question about it. Because he is religious, because he feels that homosexual conduct is wrong for religious reasons, he is basically being persecuted.”