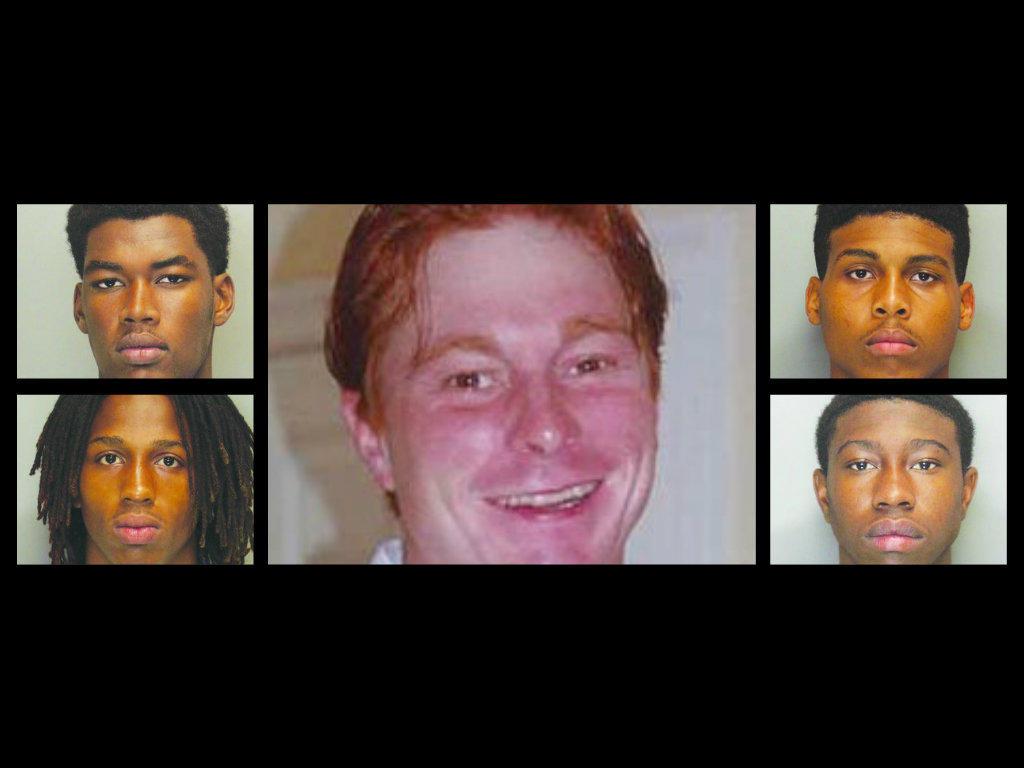 So far I haven’t heard a peep out of Al Sharpton on this one but we can be sure it’s coming… in the spirit of MSNBC’s balanced news reporting. Before I get into this story I want to state that all I, and most Americans, wanted in the Zimmerman trial was justice. I have to put my trust in the system and leave the rest up to God. I think people need to remember this. If Zimmerman was truly as guilty as many think then God will take care of him. Today I want to talk about the double standards that sometimes exist in our society.

In early July, Joshua Chellew was beaten to death by four young black gang members. Yet, chances are that you have not heard about this story before today. A few national sources have reported it but not that many. Why? Well it is because we have to understand that our national media has an agenda. The Marietta Daily Journal reported:

Four south Cobb teenagers are in custody in connection with the beating death of a 36-year-old Mableton man on Mableton Parkway early Sunday morning.

The incident initially was reported by police as a hit-and-run death over the weekend, but the narrative changed drastically Tuesday after the arrests of four teenagers on murder charges.

Jekari Oshay Strozier, 19; Antonio Shantwan Pass, 18; and Johnathan Donald Anthony, 18; all from Mableton, are in the Cobb County jail without bonds on charges of felony murder, aggravated assault and violation of the Georgia Street Gang Act.

The fourth suspect, 18-year-old Kemonta Bonds of Mableton, turned himself in to police Tuesday afternoon.

They have been accused in the beating death of Joshua Heath Chellew, 36, of Mableton and all but Bonds were arrested Monday afternoon by Cobb County investigators.

According to the warrant, the four teenagers are accused of starting a fight with Chellew at a Chevron gas station in the 6200 block of Mableton Parkway near Community Drive at about 1:20 a.m. Sunday. They repeatedly punched and kicked him, according to police.

While attempting to escape, Chellew backed into the center five-lane highway and was pushed to the ground and knocked unconscious, the warrant states.

They then walked away from Chellew, “leaving him helpless,” and he was eventually hit by a car, the warrant states.

Witnesses on the scene told police that “at no time did (the four teenagers) attempt to aid (Chellew), or to stop the approaching vehicle,” according to the warrant.

Crimes like this happen in America regularly. The problem is that whenever the victim is a minority and the perpetrator is white the media tends to bring the circus tents.

Here is a reality check. People do bad things. These teenagers proved that guns don’t kill people. They proved that racist crimes, if this proves to be racist, can go both ways. But we must understand that bad people kill those of all colors and just because a bad guy kills someone from another ethnic background it doesn’t mean it is a race crime. Maybe this was and maybe it wasn’t.

I think we need to have a national conversation about racism. Not all racists are white and not all interracial crimes are caused by the color of one’s skin. For the record George Zimmerman is of hispanic descent. He is not “white” and not the Jew that the media originally attempted to villainize. Trayvon Martin was also not the angel that he was painted to be. Beyond what I know I have to hope that the jury made the right decision and I will leave the rest up to God.

Oh yeah, remember God? This country was founded under His principles and calling for racial riots and trying to whip people into a frenzy are not part of those guiding principles. They are more so a part of communist/socialist/marxist strategies aimed toward division. Stories like the Trayvon Martin killing are exactly how a corrupt government stays in power. These stories keep Americans divided and they know it. Their media lapdogs always oblige.

If you can’t see that racism goes both ways in this country then you are probably more racist then the white crackers you speak of. Let us not forget that over 90% of black voters voted for Obama and a much lower percentage of white voters favored Romney. So could I say that blacks are racist because they refused to vote for Romney? I don’t want to go there because it’s not true. The truth is that roughly 90% of blacks always vote democrat. It has nothing to do with Obama’s skin color. And by the way… Obama is not black and I get sick of hearing that. He is technically of mixed race. His mother was white. Get over it.

But bigots can spin these arguments easily and the biggest sin is that people listen to them. Americans need to start thinking for themselves. Racism will always exist but it is less of a problem than it was 20 or 50 or 100 years ago. It will always exist to some extent because there will always be bad people and bad people come in all colors.

Yet in this country it seems that nothing qualifies as racism, or at least big news racism, unless the victim is a marketable minority. When black gang members attack an average white guy and beat him to death it doesn’t tend to make national headlines.

By making those statements I will be labeled a racist and I don’t care.

Stop trying to play God and start praying to God. I was raised to believe that we are all brothers and sisters in Christ. If a person that has a better tan than I do kills me then chances are you will never hear about it.

But the real crime is not the color of skin but the fact that we are killing our brothers and sisters.

The truth is the truth.