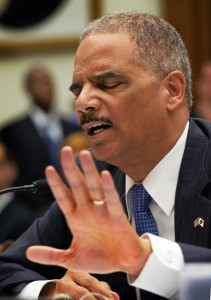 I still believe Obama does not want charges pressed against George Zimmerman, but Eric Holder is sending signals that he has already made up his mind, no matter what career lawyers in the DOJ recommend.  And doubtlessly, they will be against pursuing Zimmerman on civil rights charges.

Let’s look at the facts.  First and foremost, George Zimmerman is an Hispanic.  Liberals, who are the great definers have labeled him white, because Hispanic just doesn’t fit the narrative, they are trying to promote.  Secondly, during the trial, the only references to race came from Martin, who called Zimmerman a “creepy ass cracker.”  Rachel Jeantel tried saying that wasn’t a racist comment, but suppose a similar comment had been made against a black.  Do you suppose no one would consider it racist?

The FBI fully vetted Zimmerman, talking to his friends, neighbors, co workers and former coworkers, yet not one person could recall a single racist remark or given any sign of being a racist.

Two important things came out of the trial that is also relevant to whether the DOJ should bring charges.  Not once, did the prosecution ever claim racism was involved in Zimmerman’s decision to shoot.  They did claim he profiled Martin based on his clothing but never on his race.

Secondly, and this may come as surprise to many people, but the case was never about the “stand your ground” law.  The prosecutors kept referring to that law, but the defense never did.  That’s because it wasn’t a stand your ground incident.  “Stand your ground” applies when you feel you are being threatened.  You are obligated to try to walk away before you are justified in shooting or otherwise attacking your assailant.

Martin had Zimmerman pinned to the ground, pummeling him.  Zimmerman could not have been able to walk away to avoid confrontation.  It was a simple case of self-defense.  Liberals kept calling it “stand your ground’ to try to steer the conversation away from the attack and on to a law they could demonize.

Zimmerman mentored young black kids and even attended his prom with a young black woman on his arm.  Hardly the M.O. of a racist.

If Holder does try to prosecute Zimmerman, he’s doomed to failure.  From Holder’s standpoint, he must decide which is more damaging, not pressing charges, or pressing charges and having his case look like a circus, similar to the criminal trial.  And despite Carney’s denials, Obama will be deeply involved in the decision.  He will just pretend he isn’t.