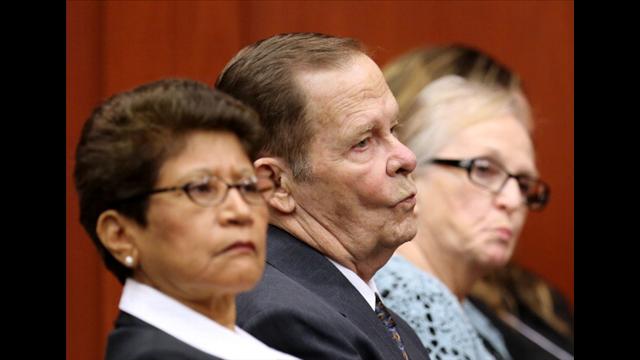 n an exclusive interview with ABC’s Barbara Walters, George Zimmerman’s parents, Robert and Gladys, said they don’t know where their son is because he is in hiding, having received death threats.

George’s parents, too, have received death threats, as have George’s attorneys and the police chief of Sanford, FL, where the shooting of 17-year-old, 5′ 11″ Trayvon Martin took place in a gated community last year.

The Zimmermans said they are too afraid to return to their Orlando home, and they haven’t even spoken to their son, who also is in hiding: “Under the circumstances, we have not been able to talk to him. To tell you the truth, we don’t trust anything, not even the phones.”

Gladys Zimmerman said her son lives off small stipends from his legal defense fund and is unemployed and without health insurance. Asked if he can ever have a normal life again, she said, “Only time will tell. Even for us, we have not been living a normal life for the past months. It is hard. We have lost everything, everything — the whole family, not only George. The whole family. We have lost everything.”

Robert Zimmerman said the decision to bring charges against his son was based on politics rather than the facts: “I never thought that we would see so much hatred, and the hatred is not brought on by any racial incident. It was brought on by attorneys being totally untruthful, other people being involved, having a certain narrative, having a certain agenda, and making this situation race-based and a political issue.”

Asked what they would say to Martin’s family, Gladys Zimmerman said, “We are deeply sorry for this tragedy. We pray for Trayvon Martin to be in a better place. He is always in our prayers.”

Meanwhile, as everyone associated with George Zimmerman are getting death threats, what do the U.S. president and the U.S. attorney general have to say?

As U.S. Attorney General and head of the Department of Justice, Eric Holder is America’s chief cop. This is what he said about the Zimmerman verdict yesterday, during a previously scheduled speech in Washington before the Delta Sigma Theta sorority’s convention:

“This tragedy provides yet another opportunity for our nation to speak honestly about the complicated and emotionally-charged issues that this case has raised. We must not – as we have too often in the past – let this opportunity pass.”

Holder called on the country “to prevent future tragedies and to deal with the underlying attitudes, mistaken beliefs and stereotypes that serve as the basis for these too common incidents,” and urged a national discussion to be conducted “with the same dignity that those who have lost the most, Trayvon’s parents, have demonstrated throughout the last year. [The Justice Department] “will continue to act in a manner that is consistent with the facts and the law.”

In other words, for Holder, it’s still all about Trayvon and how blacks are treated.

What about the President of the United States?

In a statement posted on the White House web site following the jury’s acquittal of Zimmerman, Obama called the death of Trayvon Martin a tragedy” and urged “calm reflection,” saying “We are a nation of laws, and a jury has spoken.”

Obama then used the occasion to renew his call for gun control! He said, “We should ask ourselves if we’re doing all we can to stem the tide of gun violence that claims too many lives.”