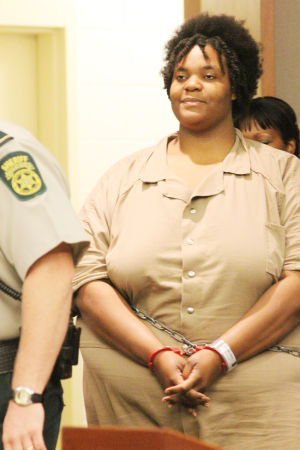 Very few things strike more fear into my heart than a 6 foot 2 inch 400+ pound woman with jihad on her mind. Sahara Tabriz Fakhir is accused of the brutal stabbing murder of Jerry Wheeler and claims to have Allah on retainer.

Sources close to The D.C. Clothesline have made it known that neither The Easter Bunny nor Santa Claus were available to take this case.  This woman is either insane or playing the part very well.

From the beginning of the hearing Fakhir was defiant, threatening, called the courthouse “cursed” and claimed that she was represented by “Allah.”

Fakhir, who is Muslim, demanded to be released. When James asked if she understood her rights and if she had an attorney, she responded “Allah is my lawyer right now and if you do not release me, Allah will have vengeance on you. Like he did in 2009 when he sent that flood – it is only going to get worse.”

But the display became even more bizarre.

Fakhir, who stands 6-2 and weighs in excess of 400 pounds, was referencing her 2009 brush with the law in her comment. In January of 2009, Fakhir was arrested for allegedly threatening to slit the throat of her probation officer. When deputies came the following day to arrest her, she threatened to kill a deputy. While in custody she allegedly destroyed property at the jail.

After attempting to fire her court-appointed attorney due to religious differences, Fakhir agreed to a guilty plea in a deal that gave her five years with 130 days to serve in June 2009.

“I mean what I said,” Fakhir said when told she would not be getting a bond Thursday. “If you don’t release me.  I mean what I said. I better be released from that Masonic Courthouse in the name of Allah. … If they disbelieve they better not proceed. …Why can’t I get a bond today? Why?”

Before leaving she turned her attention to the media gathered in the jury box and picked out one news station camera in particular to unload on.

James tried to answer, “They are a member of the public and they have the right to be in the courthouse just like anyone else.”

“They are a member of the disbelieving public All you free masons and Illuminati members in the courthouse you all are going to burn,” Fakhir said while being lead out by deputies. “I love you mother.”

At least she loves her mother which proves that there is some good in everyone.

This woman is dangerous, that is for certain. You do not call out the reptilian news media unless you are tough enough to back it up.

I’m sorry. I suppose I am having a bit of fun with this. But there is a serious side to this story. This is yet another jihad murder that will not make national news.

It is another potential race crime that will not go reported in the national media. Wheeler was white.

A $10,000 reward is now being offered for information on the murder of the father of a Douglas County deputy.  Local businessman Jerry Wheeler, 66, was found stabbed to death in his home last Wednesday afternoon.

Wheeler was a grandfather, father, husband and the owner of Lee Road Auto Service.  His wife was out of town at the time he was killed.  His son, Deputy Michael Wheeler, found his father’s body at his parents’ home on Chattahoochee Drive.  He stopped by to check on his father after he didn’t come to work.

Though innocent until proven guilty is still the case in this country I think if you watch the video below you might be inclined to think that this woman is cut from the cloth of the criminally insane.

You want to know what really scares me about Islam? It’s the only religion I know of where WOMEN regularly murder and terrorize.

How many ladies at your church fit the bill of criminally insane?

She certainly isn’t a good poster child for the “Religion of Peace.”

In the spirit of equal time I’d challenge any lefties to send me a similar story about a Christian woman. If you find a Christian woman who is this deranged and dangerous I will print the story. I am serious. Email it to me at [email protected] I will print it. I can’t say that you won’t find one but you will have to look a lot harder than I do to find daily stories of criminally crazed Muslims.

For all of you who get sick of hearing about religion you had better wake up.