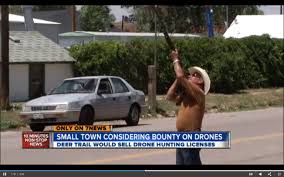 Cuius est solum, eius est usque ad coelum et ad inferos, the adopted Blackstone Treatise translated,  ”whoever owns the soil, it is theirs up to Heaven and down to Hell” had applied in the Colonies and then the United States in determining real property boundaries above and below the lands surface.  The law stood unquestioned until 1903, when the Wright Brothers introduced their invention the flying machine.

By the late 1930s, airlines were carrying mail and passengers across the country and were violating countless borders as they crossed the U.S.  Commercial airliners were required to acquire permission and often pay settlements to anyone’s house they flew over to avoid being sued.   As the courts began to be overwhelmed by countless lawsuits against the airliners, they started to reverse their enforcement and often rejected the ad coelum approach to airspace rights. Instead, they interpreted the maxim as giving property owners rights to the sky “within the range of actual occupation,” and use of airspace “to such an extent as the owner is able.” Congress, meanwhile, passed the Air Commerce Act in 1926, and gave the government jurisdiction over “navigable air space” or the sky above “minimum safe altitudes of flight” as determined by the federal government.

Until the recent events, Deer Trail, Colorado’s only claim to fame was that it was the home of the World’s First Rodeo.  Now in national news, Deer Trail is finding themselves as either an oddity or a hero depending on how you look it.   The small town in rural Colorado with a population of a little over 500 is introducing a new sport new sport, Drone Hunting.  For $25.00 a year for the license, a hunter can enjoy a year round open season and no bag limits.

Against Federal Law, most definitely, shooting down and destroying Governmental Property, but the residents of this small town do not care.

Prompted by what many believe are violations of the 4th Amendment from the Bill of Rights, which protects citizens from illegal (warrantless) search and seizure, the citizens have drafted a new bill enacting the new “Drone Hunting License.”  Deer Trail resident, Phillip Steel, drafted the ordinance.

“We do not want drones in town,” said Steel. “They fly in town, they get shot down.”

The bill to be voted on by the City Counsel in August reads as follows:

“The Town of Deer Trail shall issue a reward of $100 to any shooter who presents a valid hunting license and the following identifiable parts of an unmanned aerial vehicle whose markings and configuration are consistent with those used on any similar craft known to be owned or operated by the United States federal government.”

When Mr. Steel was asked if he had ever seen a drone flying over Dear Trail, he responded “No, this is a very symbolic ordinance. Basically, I do not believe in the idea of a surveillance society, and I believe we are heading that way.”

The ordinance specifies that weapons used for engagement of unmanned aerial vehicles would be limited to, “any shotgun, 12 gauge or smaller, having a barrel length of 18 inches or greater.”  Drone hunting licenses would be issued without a background investigation, and on an anonymous basis. Applicants would have to be at least 21 years old and be able to, “read and understand English.”

Personally, I think this is a fun idea and would love to see this challenged in court, since no one is addressing  the legality of unauthorized drone surveillance, I recommend every town and city consider doing the same.  This should be taken all the way up to the Supreme Court, since it is a violation of our Constitution’s Bill of Rights.

This article first appeared on Lady Patriots. Julia Sieben is Co-Editor of Lady Patriots and a regular contributor to The D.C. Clothesline.