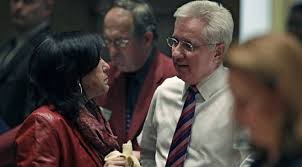 The two Colorado state senators who are facing recall petitions, lost their case in court, after trying to get the petitions tossed out a technicality.  The judge, Denver District Court Judge Robert Hyatt, said that the citizens had made their intentions well known and he refused to toss them, setting up an appeal from the two , John Morse and Angela Giron.

After the court ruling, Gov John Hickenlooper, who was sued by the state attorney general, set a recall date of September 10th.  Hickenlooper set the date as far back as he could so that returning students to the University of Colorado could hopefully help save the two democrats.

Both lawmakers angered their constituents by passing draconian gun laws in a state where gun ownership is very common.  Never before has the recall law in Colorado been used because of the high bar set for a recall petition.  It requires signatures equal to 25% of the numbers of voters who voted in the last gubernatorial election.  Petitioners had no problem gathering enough signatures for a recall.