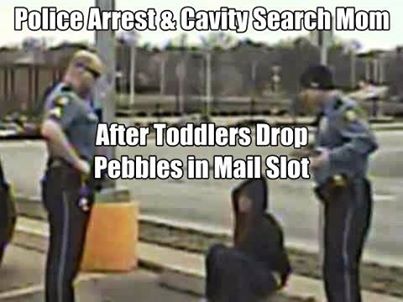 Catrina Engle is just a simple mother of two and wife to her husband. On the evening of March 3, 2013 she was leaving the Mission, Kansas Post Office and had just placed her two children, ages 4 and 2, in her minivan when she was approached by Officer Michelle Pierce and ordered to render her identification without reason. From that point on the day turned into a tragedy for her as she was arrested and a body cavity search was conducted out in the middle of the public by Officer Pierce. What was her crime? Apparently her kids put a couple of pebbles in the mailbox and though the Post Office was closed, she tried to get someone to help her and when they wouldn’t she was in a loud conversation on her cell phone in the lobby with her husband before leaving. Full dashcam footage follows.

Mrs. Engle recounts what happened after she put the girls in the minivan. She says Officer Pierce approached her. “She stated, “I’m going to need your identification.” I asked her, “Why?” Again, she said, “Give me your ID.” I again asked her, “Why?” The third time she was more demanding & said, “Give me your identification.” I then agreed that I would give her my ID but I wanted to know why first. I said “Okay, but why?” She still would not tell me. At that point, you can see what happens in the video. Without warning, she started walking towards me, twists my arm, starts cuffing me, flings me around & slams me on the ground while finishing cuffing me. At that point, Officer Tim Gift arrived & assisted her. They hurt me when they dropped me on the ground & also got my thumb stuck in the cuffs. You can hear my toddler age girls crying & screaming in the car as they took me down & throughout the hour or so they had me there.”

The video backs up the ridiculous nature and force of her arrest.

A third officer who showed up later and who Mrs. Engle claims threatened to call Child Protective Services and have her children taken away from her, was not listed on the report. However, Engle found out who the officer was via a third party, a local senior citizen who said he had been abused by the same officer. His name is Tige Dean.

No attempt was made to look after Engle’s girls over the following hour that she remained on the scene. Her oldest girl thought the officers were going to shoot her mother, according to Engle and the girls cried the entire time.

Engle attempted to get the officers to call her husband to come and get the girls. They finally did it though it took a long while for them to do so. One of the officers even mocked her stating that she had not given him the number. She immediately rattled the number off and he simply threw up his hands, eventually making a call just before she was subjected to a body cavity search.

Engle also pointed out the nature of raising her voice in the lobby. “I later found out that the Postal Employee, Yvette Jenkins, called 911 after saying that I was yelling at her, kicking the door & throwing rocks at her through the mail slot! In reality, I was arguing with my husband on the cell phone in an empty Postal lobby while using the automated machine. My bored toddlers dropped pebbles in the mail slot. You can also hear Yvette Jenkins say on the video while the cops are talking to her that the Post Office has protocol & that they asked me to leave. Yet another lie. She was actually in the back warehouse area where I couldn’t even see her & she never came out to speak to me. I was leaving on my own accord.”

You will see in the video that they subject Mrs. Engle to a humiliating body cavity search right out in the open while cars are driving by, which is completely uncalled for.

Though dashcam video should be enough to bring charges against these tyrants, one would like to see them permanently removed from the force and punished for their behavior.

“I’m disgusted with The Mission Kansas PD,” said Engle. “From the illegal cavity search, to horrifying my children, to the lies in the police report, lies from the post office, trumping up charges on me to cover their asses & then lying again saying there was no videos of anything– out of three police dash cams & a federal building (Post Office).”

“We have also been threatened by the Prosecutor of Mission, Kansas himself–Mr. David Martin,” she concluded.

Obviously they were able to obtain at least one of the dashcam video feeds from one of the cars. I find it hard to believe there are not cameras inside federal post officer.

Here’s a video created by her husband and posted to YouTube to make the arrest public.

The Mission Police Department would not comment on the arrest. However, you can give support to Mrs. Engle and call for the firing and subsequent filing of charges against the arresting officers via the contact info below: