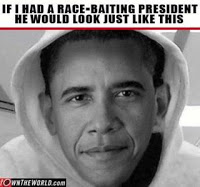 Race has become a hot-button issue in our country right now NOT only because of the George Zimmerman case, but primarily thanks to healing racial wounds being deliberately ripped open by race-baiters the likes of Barack HUSSEIN Obama, Jesse Jackson, Al Sharpton, Eric Holder, Louis Farrakhan, and many other ‘supposed’ black leaders. Racism for profit…be it financial, political, or just for attention, these men are at the forefront of racial hatred and animosity, and they will continue to feed into it as long as the main stream media gives them the opportunity and freedom to do so.

White on black crime…how the media just loves to capitalize on that, running story after story…24- hour a day coverage…coverage on what a racist George Zimmerman is because he killed a ‘sweet innocent black child’ NEVER once telling the truth about Trayvon Martin’s character or antics…NEVER telling the truth about him being a doper, a thug, and possibly even a thief.

Nope…NONE of that was reported on as the myth of the ‘sweet innocent black child’ had to be fed to the public just to stir up racial tensions and revive the old hatreds that most of America had long since put to rest.

And making this even worse is that the main stream media refuses to report on black on white crime…that’s left to conservative online sites and bloggers to do. And black on white crime is rampant especially now as the small but very vocal militant black minority has been stirred up by the media and for what…for a story…for ratings…for profit and NOTHING more. Whites do NOT riot and cause mayhem and destruction when jury verdicts do NOT go their way…that belongs solely to media instigated black mob violence, and that is where said profits arise so that is what will be reported on nonstop.

And let’s NOT forget that while the media beats their fabricated racism issue into the ground with their nonstop coverage of it they are NOT covering the true important issues like the IRS scandal, the AP/FOX reporter scandal, the Eric Snowden/NSA leaks scandal, and most importantly BENGHAZI.  BENGHAZI…the only scandal that can actually take Obama down for treason on grounds of ‘aiding and abetting the enemy’.

NO they will NOT report on this for they count on the many to forget that four brave Americans were left to die by Barack HUSSEIN Obama and because they, the media, is aiding in covering that up.

So like I said it’s up to the conservative online sites and conservative bloggers to get the truth out. And here is some of that truth that the likes of CBS, NBC, ABC, MSNBC, PBS, and the others (like the liberal print media) will NEVER tell you.

The media made and continues to make Trayvon Martin the ’cause celeb’ for white on black crime NO matter that a jury of his peers found George Zimmerman acted in self-defense and therefore found NOT guilty of murder. But the media continues to call this a ‘hate crime’ because they still claim Zimmerman ‘racially profiled’ Martin for murder simply because he was black…something that is absolutely NOT true and proven so by an FBI investigation done immediately after the shooting.

And while the media keeps Trayvon Martin in the limelight there are so many examples of black on white crime that go either under reported or NOT reported on at all, but I’ll just give you just four particularly heinous ones that were swept under the rug for NO other reason than it was a black on white crime…and reporting on that is a no-no in Obamaland.

On Christmas Eve 2010, 12-year-old Jonathan Paul Foster was kidnapped and tortured to death just because he was white (bound and gagged and burnt beyond recognition by a welding torch) by black Mona Yvette Nelson…burned so bad that he had to be ID’d through DNA testing. Where was the report on this…where was this black woman accused of being a racist..where was the outrage…it was NOWHERE.

Where was the media’s reporting and outrage when Georgia police arrested four black men in the March 2012 beating death of white Zachary Gamble, a former US Marine, who had bravely served two tours of duty in Iraq…murdered by blacks playing ‘The Knockout Game’ where the cowardly tactic of ‘sucker-punching’ a victim in the head from behind causes death. Where was the national coverage…where was the indignation…where was the protests…there was NONE as to report this would be considered racist. After all, according to the media we’re supposed to be tolerant of those NOT tolerant of us.

And beyond original reports by a few media outlets where was the nonstop coverage and outrage when 17-year old black teen De’Marquise Elkins (the same age as Trayvon Martin but being charged as an adult…one is a ‘sweet innocent child’ the other is being charged as an adult yet both are the same age) nonchalantly walked over to a stroller being pushed by his mom and point blank shot 13-month old white Antonio West in the face after demanding money from his white mother Sherry West…there has been none, and the race of the suspect has been played down in all reports after the initial reporting.

And where was the media outrage and coverage when in May 2007, a white couple was carjacked, tortured, raped, and murdered by a group of black men. According to the medical examiner, Christopher Newsom was gang-raped, shot, mutilated, and set on fire. The murderers made his girlfriend Channon Christian watch, and then they gang-raped and abused her, and after pouring bleach all over her and down her throat to cover up their crimes and remove their DNA, they wrapped her up in plastic garbage bags and left her to suffocate slowly and painfully. And where were the reports and the outrage and the nonstop coverage…again NONE as the media left this story to just fade away.

And for those who have a stomach for it, click on this link and you will be taken to a list from 2008 alone of black-on-white-crimes NEVER reported on by the media:

And all this slanted journalism basically started when Barack HUSSEIN Obama first ran for president…the media who created the anointed ‘savior’ of us all could under NO circumstances report on anything that could possibly taint the candidacy of America’s hopefully first black president.

And the biggest losers in this game of Obama controlled media subterfuge is the 99% of black Americans who want NO part of this sham but are powerless against the small but vocal militant black minority…and that is the saddest thing of all.